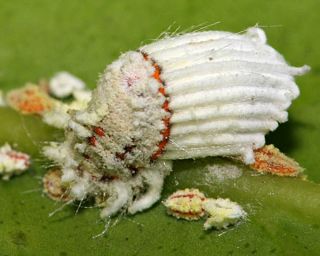 Scientists recently discovered that the cottony cushion scale insect isn’t a hermaphrodite — the species' females fertilize their own eggs through infectious, parasitic tissue that infects them at birth and is derived from the leftover sperm of their fathers.
(Image: © P. Hollinger)

A bizarre bug that looks like a rolled-up gym sock with a red, cartoonish face has an equally unusual sex life. Scientists recently discovered that the insect called the cottony cushion scale isn’t hermaphroditic – it's incestuous.

Entomologists previously believed that the cottony cushion scale (Icerya purchase) was able to fertilize its eggs without a male mate because it was a hermaphrodite, an organism that possesses the reproductive organs of both sexes.

However, researchers from Oxford University have found that the species' females fertilize their own eggs in a completely different and strange way.

"It turns out that females are not really fertilizing their eggs themselves, but instead are having this done by a parasitic tissue that infects them at birth," study researcher Laura Ross said. "It seems that this infectious tissue derives from leftover sperm from their father, who has found a sneaky way of having more children by mating with his daughters."

Researchers developed a mathematical model showing that this odd reproductive tactic could eventually eliminate the need for males in the species altogether. Once the parasitic sperm infection became widespread among the insect's population, the females would be more inclined to reproduce with these "parasitic fathers" than with living males. [Gallery: Stunning She-Males of the Animal World]

The upside for the females: Mating with a close relative ensures they pass on more copies of their genes to future generations. For the guys, however, the outlook is grim: Over time, the regular males will have a hard time finding willing mates.

"But some rare males do pop up now and again," Ross said. "We are now planning experiments with them, to recreate the ancestral state of this species, in order to test aspects of the theory."

The goofy-looking insect was originally identified in 1878 as a parasite of the kangaroo acacia plant in New Zealand. The species has since spread and is now found in citrus groves worldwide.

The Oxford study appears in the August issue of the journal American Naturalist.