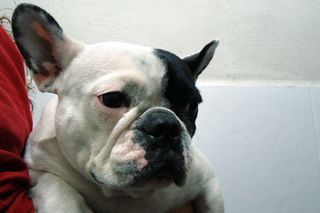 Tana was just a puppy when doctors noticed she had testicles.
(Image: © Marcos Campos)

At 3 months old, Tana, a female French bulldog was brought to a vet for a routine vaccination when specialists there became alarmed by the size of the dog's clitoris, which they said was "larger than normal." Tests revealed the first-ever sex reversal in this dog breed.

Genetic alteration of the reproductive system or sexual reversal "has been described in many species, such as goats, pigs, horses and even human beings", said lead researcher Marcos Campos, of the CEU-Cardenal Herrera University and director of the Reprovalcan assisted reproduction center for small animals.

This alteration, which has also been described in another 18 breeds of dog around the world, is "uncommon but it can occur". Sex reversal causes sterility and, over the long term, may predispose the animal to pathologies such as infections or tumours of the gonads, "since this is not a normal genital", the veterinarian explains.

The doctors found that Tana's urethra ended in the bladder, and the clitoris, which was just under a half inch (0.8 centimeters) long, contained a penis bone, which predisposed it to urinary infections that would likely cause the dog to be infertile.

To prevent Tana from suffering any medical complications, the doctors decided to surgically sterilize Tana, removing her genitals.

"The puppy is now in perfect health," Campos said in a statement.

The veterinarians suggest that owners of hermaphrodite puppies, like Tana, should not be allowed to take part in breeding programs, because it is likely that at least half of their litters will be carriers of the mutant genes. The canine hermaphrodite's siblings should also be barred from breeding programs, they say, since they too may be carrying the mutations.

The study is published in the journal Reproduction in Domestic Animals.