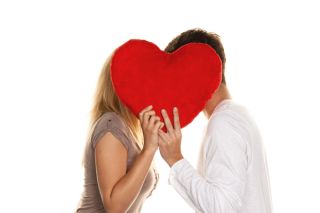 This appears to be the first time an experiment has found that a single word related to the idea of love can lead people to help out in an emergency.

Scientists had a 19-year-old woman ask 120 men between the ages of 30 and 50 chosen randomly on a street in the city of Vannes in France to point out the direction of a street that did not actually exist there. Half were asked where Valentine Street was, while the other half was asked about Martin Street.

Roughly 100 feet (30 meters) after the participants continued on their way, they encountered another 19-year-old woman who asked for help. She claimed that a nearby disreputable-looking group of four 20-year-old men had stolen her mobile telephone and refused to give it back.

The two women and the four apparent ruffians in the experiment were actually university students. The passersby who asked the seeming miscreants for the mobile phone back were told the situation was actually an experiment, while those who did not stop to give help were not told.

"The present study is the first attempt to make a link between having the idea of love in mind and being audacious," researcher Lubomir Lamy, a social psychologist at the University of Paris-Sud in France, told LiveScience. "After they heard the word 'Valentine,' male passersby may have had in mind, without being conscious of it, the idea of love, which in turn may activate the passerby's willingness to give help, which is an aspect of love, to a young female confederate."

The scientists detailed their findings in the September 2010 issue of the Swiss Journal of Psychology.