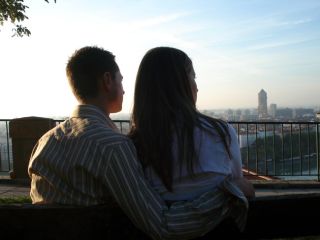 True love is all about finding that one certain someone, and anthropologists have led us to believe that the quest for the perfect mate is evolutionarily based. Humans are, the researchers contend, a naturally pair-boded species. The standard scenario goes like this: Human babies are born about three months too soon because upright walking changed the female pelvis and babies have to get out before their heads grow too big. As a result, human babies are born neurologically unfinished; they can’t sit up or grasp or do much of anything. By necessity, adult humans are designed to respond to the cries and babbles of infants; we rush to feed them and pick them up. The burden of this kind of child care is so intense, they say, that it takes two parents to bring up even one baby. Women are prone to care for babies because they give birth to this packet of half their genes. But males will only help if the female pledges to be monogamous and the male is assured of paternity; the baby is only worth a man's investment of time and energy if the baby is indeed his. Thus is born the non-Darwinian evolution of romance, hearts, flowers and chocolates, and the vow to be a pair-bonded for life. But are humans really pair-bonded? Anthropologist Sarah Blaffer Hrdy of the University of California, Davis, maintains that this pair-bonded scenario is old-fashioned and probably biased by what Western culture thinks is "right." Instead, Hrdy thinks, there are other, even better, ways to bring up babies. In her book "Mother Nature" (Ballantine Books, 2000), Hrdy claims that humans are really a cooperative breeding species, meaning that in the ancient and not so ancient past, groups of people took care of kids. Only recently has parenting been relegated to only Mom and Dad. But in modern times, there really wasn't any need for that male-female bond. It may have been that groups of sisters were the best caretakers. They share genes in common, and therefore would be compelled to take good care of their nieces and nephews. Grandparents would also be likely candidates since they should be very interested in making sure their grandchildren, with whom they share so many genes, make it to sexual maturity. Beyond Western culture where we favor idea of a monogamous pair-bond as the ideal caretakers of children, there's lots of evidence that even today cooperative breeding is still around. In many cultures, children are brought up by extended families that live together or across the compound. Studies of non-Western cultures also show that older siblings are also routinely involved in baby and child care. Even in Western culture today, daycare is a form of cooperative breeding even if those caring for our kids are not relatives but employees. It's still communal care of children. If Hrdy is correct and our species has a long history of cooperative breeding, then there is no real reason for a lasting pair-bond between adults. In fact, many romantic bonds don’t last long enough to insure that a child will make it to adulthood maturity, let alone past grammar school. One look at the divorce rate and it's clear that even if our species has a hint of pair-bondedness in us, it's obviously ebbing away. Does this mean we should forgo the flowers and candy and chocolate this time of year? Of course not. In the absence of lots of help to bring up the kids, we should take all we can get.

{{ video="nnm4024_amotherstouch_sc" title="A Mother's Touch" caption="Daughters' genes governing mothering style are switched on or off by their mothers' actions." }}