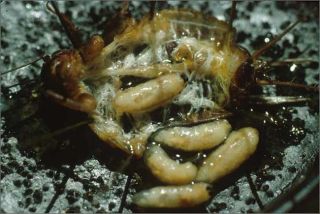 The chirps of crickets are love songs that males sing to entice females, but that is not all they attract. Chirping at times can lure doom, drawing parasitic flies that infest crickets with larvae, new research shows.

The parasites, called Ormia ochracea, burrow into their amorous hosts and then, after a week or so of feeding on organs, tear their way out, killing the cricket as they emerge. Researchers have known this for some time, and in fact it has caused the wings of one species of cricket, in Hawaii, to  evolve to the point that they cannot produce the traditional mating sound.

Scientists now find the danger posed by the parasites can rewire cricket love lives, drastically altering how males sing and females respond when parasites are around.

"It's a complex tradeoff we see here. If you're a male and don't sing, you're less likely to get females but more likely to live longer, and if you do sing, you attract both females and parasites," explained animal behaviorist Jane Brockmann at the University of Florida at Gainesville.

In experiments with wild crickets native to northern Florida, Brockmann and her colleague Manuel Vélez captured males, placed them in containers in the field, and recorded them during the spring and fall. They also surveyed free singing males in a pasture during both seasons.

In northern Florida, the parasitic flies are present only in the fall, never in the spring. The researchers found cricket songs apparently followed this schedule—75 percent of the captured males sang in the spring, compared to only 43 percent in the fall.

Experiments with female crickets captured either during the spring or fall that had recordings of male songs played at them revealed similar findings.

During mating, female crickets can be quite overt, actually mounting the males. "The spring females are extremely eager. The minute they hear a male singing, they race over to the speaker," Brockmann said.

But the fall females are much more hesitant. "They take longer and seem reluctant to approach the speaker," Brockmann said, suggesting they are trying to avoid becoming targets for the flies themselves.

Not all of the findings were clear-cut. Often, male crickets never sang, but nevertheless found mates by simply wandering about until they encountered females, begging the question of why they might sing at all.

In addition, while fewer males sang in the fall, the ones that did sang far longer. This placed those males at even greater jeopardy of getting parasitized, but Brockmann suggested it could also help male singers to mate far more often. In other words, singing may be risky, but its benefits could at times outweigh both its risks and the benefits of not singing.

"We're interested in understanding how animals adapt in the face of these pressures, because it's very difficult to predict what the outcome will be," Brockmann explained.