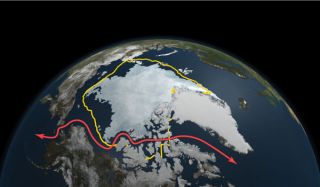 This year, Arctic sea ice extent retreated to its second-lowest point on record since 1979. Although the sea ice failed to break the official record for its seasonal low, set in 2007, this year continued a 30-year trend in decline, which scientist attribute, at least in part to human-caused climate change.

The gradual loss of sea ice at the top of the world has many implications. It threatens Arctic animals that depend on the sea ice for habitat, like polar bears and walrus, and it disrupts native people's way of life. This polar cold spot also influences weather patterns elsewhere. Because white sea ice reflects sunlight, losing it results in more warming and, as a result, less ice formation.

While data collected by the National Snow and Ice Data Center set this year as the second lowest, by other measures 2011 stood out. Using higher resolution data, a group based at the University of Bremen in Germany named this year the lowest on record.

The two years were so close that "by some ways of measurement, and with some sensors, (2011) appears to beat 2007 for a few days," Ted Scambos, senior research scientist at the NSIDC at the University of Colorado, told LiveScience in an email.

"The key is that we nearly equaled 2007 without a particularly intense pattern in the 2011 weather. This means that sea ice is 'downwardly mobile'—— when the next year with a melt-favorable pattern comes along, we could see big reductions past the 2007 level," Scambos wrote.

In addition to warm temperatures, unusual weather patterns, such as winds and cloud conditions, are blamed for bringing the ice to its low point in 2007. However, unusual weather did not play the same role this year.

Sea ice extent is expected to decline until Arctic summers are ice-free, researchers have predicted.