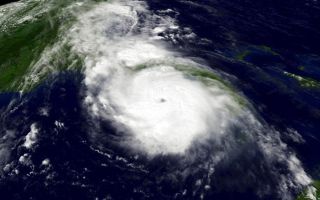 Hurricane forecasters are getting better at pinpointing the paths of these swirling storms, but predicting how intense they will be is still problematic, according to a statement released today by the American Meteorological Society.

The errors in track forecasts (which tell where a hurricane is most likely to head next and are the foundation of the warning process) have roughly half the errors that they did just 15 years ago.

Forecasts for tracks generally appear in what is called a cone: the middle portion on the cone is where the storm is most likely to hit, but it can veer anywhere inside the total cone’s area. Over the past decade, forecasters have honed their predictions so that the length of coastline under warning from that cone has decreased from 454 miles to 317 miles, meaning there’s less chance of a false warning.

But errors in the other important component of a hurricane’s forecast, its intensity, have showed little improvement in the past 30 years. Errors tend to be especially large when a storm’s strength increases or decreases rapidly (as Hurricane Charley did when it jumped from a Category 2 to a Category 4 hours before it made landfall on the southwest coast of Florida).

Rainfall is difficult to forecast in all types of storms, and rainfall amounts can vary greatly depending on the intensity of a hurricane.

Storm surges, which happen when ocean water is piled up and pushed onshore by a hurricane’s winds, can be predicted more accurately than in years past. And storm surges often cause the most significant damage and loss of life during a hurricane. But the uncertainty in a storm’s track is more key to evacuation decisions.

Forecasters are also getting better at predicting the overall activity across a hurricane season, but as the underwhelming 2006 season showed compared to the forecast, the predictions still have room for improvement.

The AMS statement also stated that forecasts would benefit from improved observational systems, such as Doppler radars and better modeling techniques.