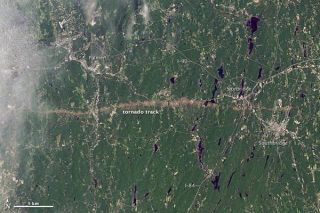 The trail of destruction from the EF-3 tornado.
(Image: © NASA Earth Observatory)

Storm survey teams from the National Weather Service (NWS) in Boston have confirmed that three tornadoes touched down in Massachusetts on June 1, including the biggest and deadliest for the state in 16 years.

The largest of the three tornadoes had winds of up to 160 mph (257 kph) and was rated an EF-3 on the tornado damage scale. The powerful twister killed four people and injured 72 in the town of Westfield. Two EF-1 twisters have also been confirmed, according to the NWS storm survey report. The outbreak was the state's biggest since 1997, when six tornadoes touched down on July 3, according to the National Climatic Data Center (NCDC).

Tornadoes in Massachusetts are rare, but not unheard of — even bigger twisters will occasionally strike the state. The last time a deadly tornado struck Massachusetts was May 29, 1995, according to the NCDC. That tornado, an EF-4 on the tornado damage scale, killed three people in the town of North Egremont. Until June 1, the state had not seen a tornado stronger than an EF-2 or a tornado-related death since that outbreak in 1995.

The Westfield EF-3 twister was on the ground for more than an hour, as it scoured a path 39 miles (63 kilometers) long and half a mile wide. The tornado traveled just north of Springfield and ended in Charlton.

The NWS confirmed an EF-1 tornado hit the town of Wilbraham, with winds of up to 90 mph (145 kph). Another EF-1 twister was also confirmed in Brimfield. Both were on the ground for only minutes, and no one was injured or killed by these tornadoes.