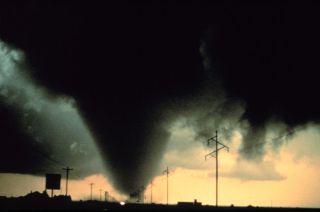 Twister central: The United States is home to roughly 85 percent of the world's tornadoes, but even by U.S. standards this tornado season has been tragically active.
(Image: © NOAA)

So far, 2011 has proved a year destined for the tornado record books.

Nearly 1,200 tornadoes have swarmed the United States this year, according to preliminary numbers from the National Oceanic and Atmospheric Administration (NOAA). Four of these storms have been rated at the highest tornado strength, an EF-5. The death toll from these tornadoes has likely topped 500, a number not seen since 1953.

But why has this year seen so many and such devastating twisters? Scientists point to several large-scale climate factors, some of which have been at work behind the scenes since winter. And at least some of the mind-boggling tornado numbers, believe it or not, can be chalked up to humans — there are more of us around to see them.

Some of the blame for the wild tornado streak lies with La Niña, a cyclical system of trade winds that cools the waters of the equatorial Pacific Ocean. (El Niño is La Niña's warm-water counterpart.)

Although we were in the grip of one of the most powerful La Niñas on record this last year, La Niña made a sudden exit about three months ago, said Bill Patzert, a climatologist at NASA's Jet Propulsion Laboratory in California.

"La Niña would have been beneficial for all these people that have been so clobbered," Patzert said. "If La Niña had maintained its strength, perhaps we wouldn't have seen so many tornadoes."

How do trade winds in the Pacific relate to deadly storms in the southern and central United States? It has to do with the jet stream, a high-speed air current that is essentially an atmospheric fence where cool, dry air meets up with warm, moist air — two of the main ingredients for severe storms. [Related: Why Tornado Forecasting is Tough]

La Niña has a stabilizing effect on the jet stream, and pushes it to higher latitudes.

Without La Niña around, the jet stream has gone rogue, Patzert told OurAmazingPlanet. "This time of the year it should be farther north," he said.

Instead, the jet stream has spent April and May draped across the middle of the country, where it has the chance to violently mix cool, dry northern air with warm, moist southern air.

And in 2011, those two air masses have been on the extreme ends of the temperature scale.

In addition, the sea surface temperature of the Gulf of Mexico is between 1.8 and 2.7 degrees Fahrenheit (1.0 to 1.5 degrees Celsius) warmer than average, said Jake Crouch, a climatologist at the National Climatic Data Center in Asheville, N.C.

Crouch said the warm, moist air is the perfect fuel for severe weather.

"If there's more moisture and the atmosphere is warmer, it's more unstable, so there's more potential there for severe thunderstorms to develop," Crouch told OurAmazingPlanet.

Like gasoline on a fire, those extremes provide the potential for more storms, and more powerful ones. And when powerful thunderstorms run into the windy conditions that occur each spring, they often begin to spin — and sometimes with horrifying consequences.

The tornado that devastated Joplin, Mo., killing at least 125 people, is not only the deadliest single tornado to strike the United States since 1947, but the storm has now been upgraded to an EF-5, the most intensely damaging tornado on the Enhanced Fujita Scale, with winds in excess of 200 mph (322 kph).

However, scientists say it's important to take a hard look at the numbers before jumping to any conclusions about the sheer numbers of tornadoes in the United States, and whether those numbers are going up.

Decades ago, when the country was more sparsely populated — and not everyone had a camera-equipped cell phone — there were simply fewer people around to spot and report tornadoes, Carbin said.

In addition, Carbin said, many initial tornado tallies include tornadoes that are counted more than once.

According to NOAA's preliminary count, April saw 875 tornadoes. "That's a gigantic number," Carbin said. "It may turn out there were that many tornadoes, but I can guarantee that many of those were not significant tornadoes, but they get into the database now because everyone has a tornado they want to report."

The highest number of tornadoes on record for any month is 542, from May 2003. Carbin said he suspects that once all the data are compiled, April's numbers will be closer to the May 2003 numbers.

In addition, both Carbin and Crouch pointed to the fact that with increasing urbanization, more people are affected when storms do hit, putting tornadoes in the spotlight.

Numbers and climate conditions aside, one thing is for certain, the scientists said — this tornado season has been unusually violent, as the horrific images splashed across the evening news attest, and it's not even close to being over.