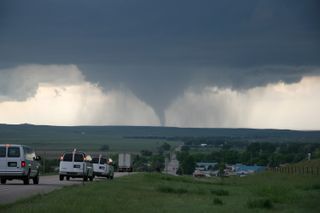 Storm chasing scientists ride toward a tornado in Wyoming, just across the border from Nebraska, during the VORTEX2 mission in 2009.
(Image: © UCAR)

The warning time is so short that residents of towns in Tornado Alley are told not to flee their homes when they hear a siren. That would be too dangerous, especially during a tornado that strikes in the dead of night. Hunker down and hope for the best, people are often told.

Tornado warnings are so short because tornadoes are almost impossible to forecast until it's too late. Unlike hurricane season, there is no forecast for tornado season — and no straightforward climate change link. But the same atmospheric players that fueled this year's wild winter of bitter cold and tremendous snowfalls could create dangerous tornadoes this spring and summer, scientists said, which could cast the light on the limits of tornado prediction.

Beginning this year, a major upgrade to the nation's radar system could help with tornado spotting, which isn't easy to do, as evidenced by the 75-percent false alarm rate for tornado warnings.

"It's easier to predict a large outbreak of thunderstorms than how many tornadoes there might be," said Bob Henson, a meteorologist with the University Corporation of Atmospheric Research in Boulder, Colo.

Last year saw 1,280 tornadoes, about what is expected for a given year in the United States, said Greg Carbin, the warning coordination meteorologist with the Storm Prediction Center in Norman, Okla. The 2011 season is off to a slow start for tornadoes, Carbin said, with only about half as many tornado reports as usual for this time of the year.

Despite the slow start, tornado season jumped into action with 24 reported tornadoes on Feb. 24 and 17 more over the past two days. The year's first tornado-related death occurred yesterday (Feb. 28) in Franklin County, Tennessee.

"Hopefully this pattern that's going on right now will not be a preview of coming attractions," Patzert told OurAmazingPlanet.

Tornado season typically starts in March and hits its stride from May to June, though it's possible for tornadoes to pop up during any time of the year (November is often called the second tornado season). During the spring and early summer, thousands of tornadoes will strike the United States. And tornadoes can strike anywhere at any time, day or night — a tornado hit New York City at night in September last year.

Most of the biggest and baddest tornadoes spin off supercell storms, which are up to 50,000 feet (15,000 meters) tall and can last for hours.Supercells need three main ingredients to form: energy, rotation and a cap. The United States has plenty of all three and once they mix, a supercell storm can spit out a tornado in minutes.

"That's why we're the tornado capital of the world. It's just geography," Patzert said.

The energy comes from the collision of warm, moist air from the Gulf of Mexico and the cool, dry Arctic air. The warm air rises and hits  wind shear, a layer of the atmosphere where the winds change direction over a short height, and creates the rotation — think of a pinwheel with air pushing in opposite directions on the top and bottom. Below the pinwheel, a cap of warm air bottles up surface heat below about 10,000 feet (3,000 m).

Heat builds until it punches through the cap, triggering a thunderstorm. With enough air shooting up and down, the pinwheel is knocked on its side, creating a huge rotating mass of clouds called a mesocyclone — the hallmark of a tornado-spawning supercell storm. But there are a number of flies in the tornado-generating ointment, Carbin said — and because of that, a tornado is actually a rare event.

Only a fraction of supercell storms create tornadoes, and meteorologists are not exactly sure why. Meteorologists can't even say when during a supercell's lifetime a tornado will form. This is not what the good folks in Tornado Alley want to hear.

Most of the Earth's tornadoes touch down in the hotbed known as Tornado Alley, bordered by the Dakotas to the north, the Gulf Coast to the south, the Rocky Mountains to the west and the Appalachian Mountains to the east. Tornadoes are so common here that tour guides often charge thousands of dollars to lead groups on weeklong tornado-watching tours.

Southeast of Tornado Alley is Dixie Alley, home to the deadliest tornadoes. Dixie Alley spreads from the Lower Mississippi Valley to the Upper Tennessee Valley, including Arkansas, Mississippi, Louisiana, Alabama, Georgia and the Florida panhandle.

Dixie Alley is where storm assessment teams are sifting through the damage from last week's tornadoes, which had estimated strengths up to EF2.

A tornado's strength is based on the amount of damage it causes. The Enhanced Fujita tornado damage scale runs from 0 (minor damage) to 5 (a storm that is powerful enough to  destroy a house).

Tornadoes are also rated based on their wind speeds. An average tornado has maximum wind speeds of about 112 mph (180 kph) or less, measures around 250 feet (76 m) in width and travels approximately one mile before unraveling. Some chart toppers have had 300 mph (480 kph) winds— almost twice that of 1992's devastating Hurricane Andrew. The hurricane was a  Category 5 storm, the highest hurricane rating.

The problem with how scientists count and rank tornadoes is that someone has to see it or it has to hit something. The biggest tornado of all time could have roared through an open field and no one would have known it.

"If nobody saw it, it wasn't in the record," Carbin said.

This year, meteorologists are rolling out the latest in weather radar technology to help see the unseen. Say goodbye to Doppler radar and say hello to Dual Pol, or Dual Polarization radar. These radars can see debris such as grass and leaves circulating within a tornado, even when the twister is cloaked by a rain cloud. A Dual Pol radar will fire up in Oklahoma this week and five more will be tested this summer. Over the next two years, all 169 of the National Weather Service's Doppler radars will be replaced.

These radars will not help with forecasts, but they will help with so-called "now-casts," or tracking a tornado that is on the ground.

"Let's say they have a tornado warning out but they don't know if one is really there, then 'bingo!' – they can get this information out," said Paul Schlatter, the meteorologist with the National Weather Service in Norman that is training forecasters on the new radars.

New radar technology should help with public safety now, but without a complete history of tornadoes, climate scientists cannot say much about how the tornado threat will change in a warming world.

The authority on climate science, The Intergovernmental Panel on Climate Change's (IPCC) Fourth Assessment Report Summary for Policymakers, releasedin 2007, said: "There is insufficient evidence to determine whether trends exist in the meridional overturning circulation of the global ocean or in small scale phenomena such as tornadoes, hail, lightning and dust-storms."

At first glance, the number of tornadoes seems to have increased since 1950. But that could be due to more people reporting tornadoes, or more buildings being hit as the country's population grows and its cities and towns expand.In 1950, there were about 600 tornado reports.In 2010, there were about 1,500.

There are also more Doppler radars today — the 169 owned by the NWS were installed beginning in the 1990s — to keep an eye on supercells.

Yet there are reasons to think that climate change could create more severe tornadoes in Tornado Alley, since there is some indication that severe thunderstorms will increase. Global warming could change two of the basic ingredients for a severe thunderstorm — atmospheric instability and wind shear.

As temperature increases, so does instability. But as the poles warm, the large-scale temperature change across the atmosphere and vertical wind shear will decrease, said Harold Brooks, an atmospheric scientist at the U.S. National Oceanic and Atmospheric Administration's National Severe Storms Laboratory in Norman, Okla.

"So, you end up with one thing being more favorable, the other less," Brooks told OurAmazingPlanet."We don't even know if that means we should expect more tornadoes or less tornadoes."

Scientists need a better record of the number of tornadoes that form each year, but detecting every tornado isn't likely, Brooks said. The best hope is to do better with computer models to connect big changes in the environment with tornadoes, so scientists can say how often we'll have to put out tornado warnings in a warmer world.

What will this year bring?

There are clues in the climate about what this year's tornado season may bring.

If the La Niña climate pattern (governed by colder-than-normal Pacific Ocean waters and changes to prevailing atmospheric winds) continues to fade as expected, the Arctic outburst that was behind many of North America's winter storms could be more of a factor because it could add instability and vorticity (the tendency of fluids, such as air, to spin) to the atmosphere, Patzert said.

"At this point, La Niña is on the wane," Patzert said. "This strong negative Arctic oscillation pattern which has given such a fierce winter for Europe and the United States, that's the one we should definitely keep an eye on."

The Arctic Oscillation tends to be weekly to monthly, so there's really no way to create a tornado forecast based on it. Numerical models are becoming more advanced, but they take months to calculate the probabilities of a tornado forming, so that's not practical either, said Andrew Taylor, a meteorologist with the National Weather Service.  So it's watch and wait for those hoping to avoid tornadoes.

"If you've got an inside track to the weather gods, you ask for a positive Arctic Oscillation and a resurgence of La Niña," Patzert said.