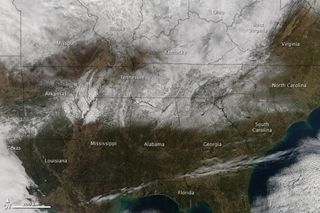 Snow blanketed parts of the South in early January. Will this winter be the coldest in decades?
(Image: © NASA Earth Observatory.)

Climate experts are far from having a complete understanding of the world's weather machine, however, they believe they can account for some of the wild weather changes this winter season.

Scientists say, for instance, that the cooling that has been observed across much of the United States and Europe has been caused by naturally occurring shifts in atmospheric circulation that dictate the large-scale movement of hot and cold air.

"Be it dry or be it wet, the weather'll always pay its debt," is an old saying that most agree is true. And it's also a meteorological truism that the abnormal is normal: some place is always experiencing what seems to be unusual weather .

Most of it is, in fact, an inevitable product of the global climate system's usual churning, but occasionally the cause really is an out-of-the-ordinary natural force. And during this winter, two such forces have been at work.

Changes in sea surface temperature and pressure around the equator in the eastern Pacific Ocean go from one extreme to another about every three to seven years. Scientists call the atmospheric changes that accompany these swings the southern oscillation. These warm or cold phases can sometimes take up to two years to develop and play out, though each can vary in length and strength.

El Niño Spanish for "little boy" is a massive strip of abnormally warm water that, when fully developed, stretches westward from South America along the equator. Its name is derived from the baby Jesus, because traditionally it was first noticed by fisherman around Christmas. When the water in the Pacific Ocean is unusually warm it causes evaporation, creating more storms, disrupting the upper level jet stream and reducing the fish catch off South America.

A moderately strong El Niño dominated global weather during the winter of 2009-2010.

But it's not El Niño that has been a player in this winter's wild weather, for scientists have also determined that El Niño sometimes is followed by an abnormally cold stretch of water that can also develop in the eastern North Pacific. So they decided to name it La Niña, or the "little girl."

La Niña is the latest swing of our planet's climatic pendulum and, like El Niño, it is responsible for atmospheric patterns that influence weather around the world. During a La Niña, trade winds are stronger than normal and the cold water that normally exists along the coast of South America extends westward into the central equatorial Pacific.