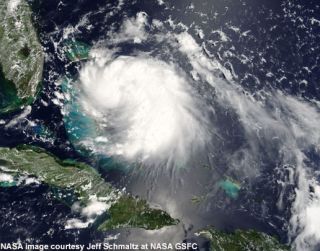 Tornadoes and hurricanes are very different types of storms. Tornadoes can form a vicious mile-wide funnel in minutes, level a town, and fade away minutes later, making them difficult to forecast. Hurricanes can be spotted weeks out, and the 100-mile-wide storms typically spend days crossing the Atlantic before they hit shore.

Yet, both are fueled by rotating, water-filled air masses. Will the climactic conditions that made this spring so tornado heavy also drive a hurricane-heavy summer and fall?

"There is no relationship between hurricane and tornado activity. There is no scientific basis for a correlation between them," Dennis Feltgen, a meteorologist with the National Oceanic and Atmospheric Administration's National Hurricane Center, told Life's Little Mysteries, a sister site to LiveScience.

That said, scientists have predicted a very active 2011 hurricane season, which begins June 1. And while some researchers have pointed to a link between the two, related to larger climate phenomena, no clear connection exists. [Read: Is Climate Change Causing the Record-Breaking Tornadoes & Floods?]

The two phenomena, hurricanes and tornadoes, result from such different sets of weather conditions that there has never actually been a study (to the knowledge of the scientists we consulted) that has tried to address the link. "But in thinking about the factors that we know affect tornadoes and the ones that affect hurricanes, it is not at all clear how springtime tornadoes would correlate to summer and fall hurricanes," said Martin Hoerling, meteorologist and head of the climate attribution team at the NOAA Earth Systems Laboratory.

Tornadoes form when spring thunderclouds in the Midwest experience vertical wind shear — wind that changes direction with altitude. Hurricanes form in the tropical Atlantic Ocean later in the year. "Hurricanes depend on the ocean temperature," Hoerling said.

The only way there could be a correlation between hurricane and tornado activity, Hoerling explained, is if a larger-scale climate event influenced both sets of weather conditions — those that lead to tornadoes and those that lead to hurricanes. "If there were a link it would likely have to occur through the El Niño/La Niña cycle," he said. El Niño and La Niña are the yin and yang of a five-year climate oscillation that makes the oceans warmer (in El Niño years) and cooler (in La Niña years).

"Hurricanes do depend on the state of [this cycle]," Hoerling said. "They are suppressed during El Niño and enhanced during La Niña. So then we have the question, 'Does El Niño/La Niña affect tornado counts?'" Specifically, does La Niña lead to more and stronger tornadoes, like it leads to more and stronger hurricanes?

Hoerling and the NOAA climate attribution team have conducted a preliminary investigation on that front. While some scientists have pointed to a potential link between this year's tornado activity and aspects of La Niña, Hoerling's analysis of 100 years' worth of data, as well as past studies, have not been able to identify a clear, statistics-backed indication that La Niña years see more, or stronger, tornadoes.

"The relation of [El Niño/La Niña] with major destructive tornado events is complicated, and statistical inferences could be very susceptible to sampling biases," they wrote in their report. Depending on which span of years, or which tornado strengths, are being analyzed, very different conclusions could be drawn.