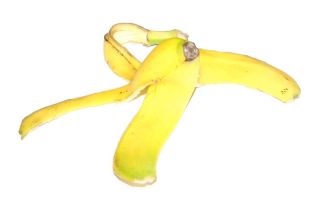 Banana peels are famous for causing slips, but now scientists find they could keep pollutants from slipping into your water.

Past research had shown that coconut fibers, peanut shells and other plant materials could remove potentially toxic heavy metals such as lead and copper from water. Mines, factories and farms can all generate such waste, with the potential to harm one's health and the environment. And current methods for purifying water of heavy metals are expensive, with some materials used in the process being poisonous themselves.

Scientists at São Paulo State University in Brazil and their colleagues wanted to see if banana peels could also act as water purifiers. This material already has a surprising number of potential uses, including polishing items like silver and leather shoes.

"I was at home eating some bananas when I had the idea, 'Why not make something with this?'" said researcher Gustavo Castro, an environmental chemist at São Paulo State University.

Compounds in banana peels contain atoms of nitrogen, sulfur and organic compounds such as carboxylic acids. These acids are charged such that their negatively charged electron pairs are exposed, meaning they can bind with metals in the water that usually have a positive charge, Castro explained.

The researchers found that minced banana peel performed as well or better at removing copper and lead than many other filtering materials, quickly removing both from water in the Paraná River in Brazil.

"Theextraction capacity found was superior to many synthetic materials developed in the last decade," Castro said.

They noted that a purifier made of layers of minced banana peel could be used up to 11 times without losing its metal-snagging properties. Synthetic materials can be reused more times, but natural materials are dramatically cheaper and do not require chemical processing to work.

"The next step is to apply the material in real samples of industrial effluents," Castro said.

Castro noted it's important that people not to try to use banana peels as filters at home.

"Banana peels do not have a proven ability to extract other substances from water," he told LiveScience. "Some poisonous substances may be present."