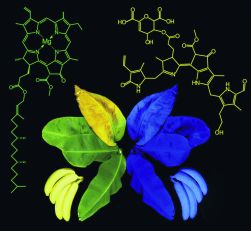 When a banana ripens, it turns yellow — unless you look at it under a black light, in which case, it appears bright blue, a new study has found. The banana's blue glow was discovered by scientists at the University of Innsbruck in Austria and Columbia University in New York, the first team to look for this phenomenon in bananas. The researchers think the coloring is related to the degradation of chlorophyll that occurs as the banana ripens and could aid animals who eat bananas and can see in the ultraviolet range of the spectrum Chlorophyll is the green pigment present in plants that allows them to obtain energy from light during photosynthesis. As the banana ripens, the chlorophyll begins to break down — a process called catabolism — and the resulting products are concentrated in the banana peel. Under ultraviolet light, more commonly known as black light, these breakdown products fluoresce, or glow, blue. "Surprisingly, this blue luminescence has been entirely overlooked," said study team leader Bernhard Kräutler of the University of Innsbruck. Before the team's discovery, detailed in the Oct. 10 early online edition of the journal Angewandte Chemie, fluorescing chlorophyll catabolytes, or products of breakdown, had only been found in higher plants and were short-lived. While the banana's blue glow does diminish as it ripens, its catabolytes are unusually long-lived. This long duration could be due to one of the breakdown products identified in the banana peel by the team, which has a stabilizing effect and has never been seen before as a chlorophyll breakdown product. Just why this degradation occurs differently in the banana fruit than other plants, even banana leaves, isn't completely known, but Kräutler has a couple hunches. "In contrast to humans, many of the animals that eat bananas can see light in the UV range," he said. "The blue luminescence of the banana fruit could give them a distinct signal that the fruit is ripe." Another possibility is that the chlorophyll breakdown products also serve a biological function for the banana, as the stable products could help keep the fruit viable for longer, Kräutler said.