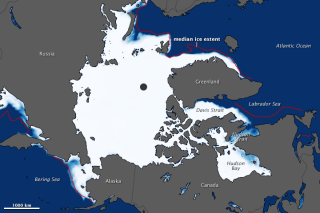 Arctic sea ice was at its lowest extent in January compared with any other time in the last 32 years, according to a new report by the U.S. National Snow and Ice Data Center (NSIDC).

This winter has been cold and snowy in North America, but farther north, temperatures have been unusually warm. Data collected by NASA's Aqua satellite shows that ice was low in Canada's Hudson Bay, Hudson Strait and the Davis Strait between Canada and Greenland. Normally these areas are frozen over by late November, the NSIDC reported. This winter, they didn't free until mid-January 2011. The Labrador Sea was similarly ice-free.

There are two possible explanations for the extended thaw, NSIDC reported. The Arctic Oscillation, a seesaw pattern of atmospheric pressure differences, was in negative mode in December 2010 and January 2011. When the Arctic Oscillation is negative, it brings cold and snow to Europe and North America but allows warmer air to creep into the Arctic. (A positive oscillation traps cold air up north.)

Another factor, NSIDC explained, could be that areas of open ocean were still releasing heat into the atmosphere. Bright white ice reflects solar heat back into space, but dark ocean waters (or those without ice cover) absorb the energy, warming and reinforcing the ice-melting process.

The National Oceanic and Atmospheric Administration (NOAA) has forecast that the Arctic Oscillation should return to positive mode in February 2011. According to NSIDC, Arctic winter sea ice has declined by approximately 3.3 percent per decade since 1979.