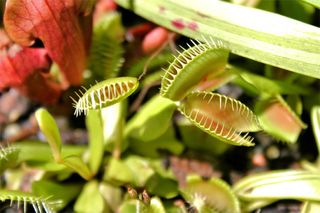 Venus flytraps can gather nutrients from gases in the air and the soil, but they live in poor soil. So they are healthier if they consume meaty flies as well.
(Image: © Dreamstime.)

Venus flytraps nab their insect prey by snapping shut in response to pressure from little bug feet. Now, researchers have discovered the chemicals that protect the carnivorous plant from false alarms.

Venus flytraps "hunt" by luring their prey in with sweet nectar. Sensory hairs on the plant induce the trap, a pair of clamshell-shaped petals, to slam shut, trapping prey inside for digestion. But a single touch won't induce a flytrap to close: It takes at least two separate stimulations within 30 seconds to trigger a trap.

The new study finds two substances that must reach critical mass before flytraps slam shut. The researchers hypothesize that the chemicals build up as an insect brushes the plant's sensory hairs, helping to ensure that the plant traps a nourishing live meal rather than bits of leaf debris or other material.

To ferret out the trap-closing chemicals, researchers from the Universities of Tohoku, Hirosaki and Hiroshima in Japan cloned a strain of Venus flytraps and extracted the plants' chemicals. They then cut traps off of plants and soaked them in solutions of the extracts. Some of the solutions triggered the traps to close while others did nothing, enabling the researchers to whittle down the chemicals by process of elimination.

After multiple rounds of testing, two contestants were left standing: One, a potassium salt derived from a plant hormone called jasmonic acid, and the second a mixture of sugar components that has yet to be identified, because it has only ever been isolated in miniscule amounts.

Past research found the flytrap leaves close so quickly — in under a second — because they snap from convex to concave the same way that a contact lens can flip inside out.

The new findings suggest that a Venus flytrap's chemical signals work much like those in the human brain. Like neurotransmitters, the plant chemicals accumulate until they affect the plants' cell membranes, creating electrical imbalances that cells use to communicate. In the brain, these so-called "action potentials" are the language of neurons. In a Venus flytrap, they're the signal that spells dinnertime for the plant and slow digestion for its hapless prey.

The researchers reported their findings online Oct. 20 in the journal ChemBioChem.