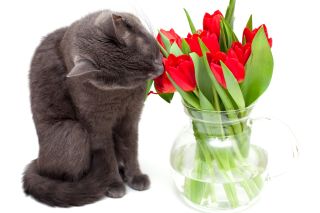 Some common plants are toxic to cats and/or dogs.
(Image: © Diana Taliun | Shutterstock.com)

Though dogs and cats clearly prefer meat, both pets will nibble and even ingest plants. Since some greenery is toxic, which plants should pet owners avoid?

Cat owners should skip true lilies — including the tiger, Asiatic, Easter and Japanese varieties — which can cause kidney failure in cats; just a few leaves or petals of these plants can prove fatal. Daylilies, which are not true lilies, can also result in kidney failure in cats. (Lilies can also cause symptoms, though much less severe, such as gastrointestinal disturbances, in dogs.)

Other plants can damage organs in both animals. The castor bean plant contains ricin, which can cause kidney failure in both cats and dogs. Even an ounce of castor bean seeds can kill a pet.

Some plants harm the liver. Even a single seed of the sago palm contains enough of the toxin cycasin to severely damage the liver and sometimes cause death. The autumn crocus contains colchicine, which damages livers and kidneys, and can lead to respiratory failure in cats or dogs.

Plants that damage the heart clearly pose a serious threat. Azaleas contain grayanotoxin, which can put animals into a coma and result in cardiovascular collapse. The outdoor shrub oleander can slow the heart rate, potentially proving fatal.

Many toxic plants irritate the gastrointestinal tract. Cyclamen can cause life-threatening vomiting in both dogs and cats. This flower's roots pose the greatest danger, so keep an eye on dogs digging through the garden. The spring crocus, the Kalanchoe flowering plant, and tulip and hyacinth bulbs all can cause less-severe gastrointestinal problems in both animals.

For a more complete list of plants that can be toxic to pets, visit the APSCA's website.

In all poisonings, immediate treatment offers the best prognosis, and identifying the poison is crucial. So, bring a sample of the plant and your pet's vomit (if possible), and head immediately to the vet.