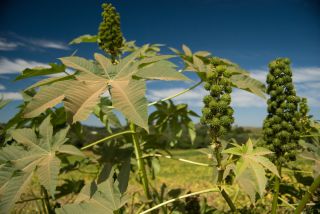 An envelope sent to U.S. Sen. Roger Wicker of Mississippi and intercepted by a government mail facility on Tuesday, April 16, has tested positive for ricin, a powdery, white poison.

And today, preliminary reports indicate a letter sent to President Barack Obama also tested positive for ricin. What is this deadly substance?

Ricin is derived from a common plant, the castor bean (Ricinus communis), native to the Mediterranean and Middle East and cultivated elsewhere as an ornamental plant. It's also the source of castor oil, which has many uses in medicine, food and industry. [The 10 Most Poisonous Common Plants]

But the plant is also linked to murderous, diabolical plots worthy of a spy thriller: Ricin is a highly potent toxin that can kill a person in amounts as small as a few grains of sand.

According to the Centers for Disease Control and Prevention (CDC), just chewing and swallowing castor beans can cause serious injury. Ricin is easily derived from the waste made by processing castor beans.

In 1969 — when Bulgaria was still part of the Soviet Bloc — a political dissident named Georgi Markov defected from Bulgaria, eventually settling in London, where he campaigned vigorously against Soviet oppression.

While waiting for a bus on a London street in 1978, Markov was poked in the leg by the tip of someone's umbrella. The umbrella, it turns out, stung Markov with a tiny amount of ricin. He died shortly thereafter, and his murderer (suspected of being a Soviet agent) was never found.

Ricin kills by inhibiting protein synthesis in cells, according to the CDC. Symptoms of ricin poisoning, which can take several hours to show up, vary depending on whether the toxin was inhaled, ingested or — as in the case of Markov — injected.

Symptoms may include fever, difficulty breathing, fluid in the lungs, vomiting, diarrhea, dehydration and blood in the urine. Death can result within 72 hours; even survivors may have long-term organ failure and other health problems.

There is no known antidote for ricin poisoning.

Despite its deadly nature — or because of it — ricin has been investigated for medicinal uses, including cancer treatment, according to the National Terror Alert Response Network. Ricin may have the potential to target and kill cancer cells.

As a bioterrorism weapon, ricin is of limited concern to security experts, since it's better suited to small-scale attacks on individuals than large groups, the Associated Press reports. Compared with other terrorist weapons, "it is one of the least significant; it is a poison," University of Maryland bioterrorism expert Milt Leitenberg told the AP.

Nonetheless, the New York Times reported in 2011 that an al-Qaida group in Yemen was trying to acquire large amounts of castor beans to produce ricin bombs.

In 2004, ricin was found in a letter in a U.S. Capitol mailroom that served then-Majority Leader Bill Frist, CNN.com reports. Sixteen mailroom employees went through decontamination procedures; none reported any ill effects.

Other bioterrorism agents such as anthrax are of greater concern to security experts. In 2001, letters containing anthrax were sent to two members of Congress and several news organizations. In those attacks, five people died and 17 were sickened.