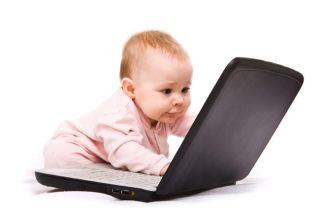 Baby plays on computer...a genius in the making?
(Image: © Dreamstime.)

PROVIDENCE, R.I.—Our special stature among Earth's creatures may look shaky when considering that humans share 98 percent of our genes and many behaviors with chimps. Yet human behaviors stand out by reaching levels of complexity unseen in any other part of the animal world, according to a neurobiologist.

Seeing humans beyond mechanistic cause-and-effect or animal-like behaviors can be difficult after a lifetime spent studying brains and behavior, said Robert Sapolsky, a neurobiologist and primatologist at Stanford University. But he plunged wholeheartedly into a keynote talk about human uniqueness during a brain science symposium here at Brown University on Wednesday (Oct. 13).

What makes humans special comes in no small part from the sheer quantity of available brain power – at least 300,000 brain cells for each neuron in a fruit fly brain. Sapolsky referred to a quip made by chess grand master Garry Kasparov after being defeated by IBM's Deep Blue supercomputer: "Sometimes quantity becomes quality."

Basic biological units such as brain cells remain more or less the same across species. Yet humans have harnessed their higher neuron count and complex brain networks to achieve an unmatched level of cognitive sophistication.

"We have the same nuts-and-bolts physiology, yet we're using it in very novel ways," Sapolsky explained.

Taking it to another level

Animals may share characteristics with humans such as politically motivated aggression, empathy and culture, but humans take them to a level without parallel among animals.

Bands of chimps regularly patrol their territories to kill any intruders, conquer the territory of neighboring chimps, and even wipe out other chimp bands in an act bordering on genocide, Sapolsky said. By contrast, humans have deployed terrible yet sophisticated weapons technologies so that a drone operator sitting at Creech Air Force Base outside Las Vegas can "rain down hellfire on Mesopotamia [Iraq]" by day, and then rush out in the evening to a daughter's ballet recital.

Chimps and some other species have also demonstrated "theory of mind," which allows them to understand the thoughts or motivations of another creature. But they fall short of humans when considering secondary theory of mind – understanding what another person thinks of a third party. Such capabilities allow humans to enjoy delicious stories with layers of intrigue and gossip, such as "every Shakespeare play ever written," Sapolsky said.

Like us, animals such as chimps have shown they can take pleasure in just anticipating a reward, and will perform an action even if there is some delay in getting the reward. But no chimp has the long-range vision of a human to study for the SAT so that he or she can get into a good college in order to get a good job.

Empathy is also not unknown among chimp troops, as evidenced when members of a troop groom an "innocent bystander" that was pummeled by an aggressive alpha chimp. Yet humans can commonly extend empathy over time and space, even experiencing feeling on behalf of other species. People can understand the terror in the eyes of a horse in Picasso's Guernica painting, or even feel sympathy for the fictional blue-skinned Na'vi aliens of the 3D film "Avatar."

On a darker note, Sapolsky pointed out how the sophisticated thought processes of humans can also go haywire in ways that defy imitation in the animal world. Depression stands out as one of the few big exceptions as a mental illness that afflicts humans and animals alike.

But plenty more can and does go wrong in the human brain. Some obsessive-compulsive disorder sufferers ritualistically act out the same behavior again and again. People with Tourette syndrome often make uncontrolled noises and curse like sailors.

Even rarer neurobiological problems exist. Patients suffering from so-called Rapunzel syndrome compulsively seek out and eat so much hair that it blocks their intestines; acrotomophiliacs can only experience sexual arousal with amputees; and apotemnophiliacs try to lop off limbs in the belief that they deserve to be amputees.

Certainly no chimp or baboon ever suffered from so-called Jerusalem syndrome, Sapolsky said. The bizarre instances of temporary insanity almost exclusively afflict devout Christians on pilgrimage to Jerusalem who tend to be traveling alone, jetlagged and experiencing disappointment with a modern Jerusalem that does not resemble their dreamy vision of the Holy Land. These individuals typically end up wrapping a white sheet around their naked bodies like a toga and preaching on street corners in the belief that they are the messiah or an apostle.

Answers to everything and nothing

Some people may still worry about neuroscientists slowly stripping away the uniqueness of humans and reducing human motivations and behaviors to equations or chemical formulas. But Sapolsky suggested two reasons not to worry.

First, explaining everything in purely mechanistic terms would not diminish our appreciation of classical music composed by Johann Sebastian Bach or the sight of a leaping gazelle, Sapolsky said. But he added that the second and more crucial reason to have no fear is that researchers will never somehow figure out an answer for everything.

"Every time neuroscience comes up with an answer, it's attached to 10 new questions, and nine of them are better than the original," Sapolsky said.

That idea of science being meant to encourage a sense of mystery rather than cure seemed to infect the audience of scientists and laypeoplewhen it came time for questions. One person pointed out that one of the few differences between humans and chimps comes from the amount of cell division for brain cells, and wondered about someday getting chimp genes to "crank out a few more orders of complexity" and boost chimp intelligence.

The questioner then asked about applying the same procedure to humans and cranking up our intelligence. Sapolsky didn't miss a beat.

"I think it would transform reality TV as we know it," Sapolsky said.