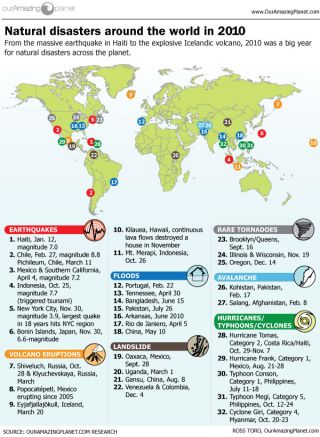 2010 was an eventful year for natural disasters.

The natural forces of the planet were in full swing this year, with some spectacular and devastating consequences. From the massive Haiti earthquake to a bevy of explosive volcano eruptions, 2010 saw its share of natural disasters across the planet. Here are some of the headline-grabbing natural disasters that OurAmazingPlanet and its sister sites covered in 2010.

Just 12 days into the new year, a massive earthquake struck Port-au-Prince, Haiti. The quake was responsible for the deaths of more than 200,000 people and left more than 1.5 million homeless. Months after the devastating quake, scientists discovered that a previously unmapped fault was responsible for the magnitude-7.0 earthquake, not the fault originally blamed for the temblor. The earthquake increased stresses on nearby faults, potentially increasing the likelihood of another major temblor in the islands, scientists also found.

Just weeks after Haiti was struck, a magnitude-8.8 earthquake hit south-central Chile on Feb. 27. The massive temblor changed the country’s landscape by raising the ground by more than 8 feet (2.4 meters) near the coast and sinking land farther inward, scientists found. [See images of Chile's raised coast.]

In early September, a magnitude-7.1 earthquake ruptured in Christchurch, New Zealand, a city with a population of about 400,000. The quake caused millions of dollars of damage, and recovery efforts in the downtown business district were set back by a magnitude-4.9 earthquake, an aftershock that struck on Dec. 28.

In quake-prone Indonesia, a 7.7-magnitude earthquake struck on Oct. 25. The quake triggered a 10-foot (3-meter) tsunami, killing at least 113 people. The earthquake ruptured during a process called thrust faulting, when one of the Earth’s rocky plates subducted or took a dive below the other.

While not devastating (and not even felt by many), New York City experienced its largest earthquake in 18 years when a magnitude-3.9 earthquake rattled the region on Nov. 30.

The eruption of the Icelandic volcano Eyjafjallajökull in April created a giant ash cloud, which at one point covered most of Europe. The spread of the ash in the atmosphere created fiery red sunsets and brought international aviation to a temporary standstill, resulting in travel chaos for tens of thousands. The plume was so electrically charged that it made its own lightning. That lightning could help scientists accurately measure the height of future volcanic ash plumes. [Related: Gallery: Iceland Volcano's Fiery Sunsets.]

Over in the Pacific Ring of Fire, Indonesia’s Mount Merapi began erupting on Oct. 26, killing more than 350 people and leaving nearly 400,000 refugees that fled the area. [Related: Mount Merapi's Destruction Seen From Space.]

Most Americans may not have realized it, but the 2010 Atlantic hurricane season, which ran from June 1 to Nov. 30, was among the busiest on record. The season saw a near-record number of storms but few had an impact on the United States.

The Atlantic basin, which includes the Caribbean Sea and the Gulf of Mexico, had 19 named storms (tropical storms and hurricanes) in all, which placed the season in a tie with 1887 and 1995 as the third busiest on record, according to the National Oceanic and Atmospheric Administration. The busiest hurricane season on record is still 2005, a year that saw 28 named storms, including Hurricane Katrina.

Unlike the busy Atlantic hurricane season, the 2010 Pacific hurricane season was the least active on record in terms of named storms and hurricanes, with 13 total storms. Hurricane Celia, a category 5 storm that hit near Acapulco, Mexico, was the strongest in the Pacific.

The Pacific typhoon season is ongoing, but its strongest storm yet, Typhoon Megi — a category 5 storm — struck the Philippines in mid-October. The storm was one of the most intense tropical cyclones on record (tropical cyclone is the generic name for tropical storms, typhoons and hurricanes).

Elsewhere, Tropical Storm Jal swirled over the northern Indian Ocean on Nov. 4. Jal was one of five cyclones in the region — the strongest of which was Cyclone Giri, a category 4 storm that hit Myanmar in late October.

Tornadoes touched down in parts of the Untied States that haven’t seen twisters in a while. In New York City, the boroughs of Brooklyn and Queens saw a tornado rip through on Sept. 17, knocking out power and uprooting trees across the city. [See images of damage in Queens.]

After a long tornado lull during the so-called second tornado season in November a twister hit Caledonia, Ill., on Nov. 22 — the first November tornado to hit Illinois in more than five years. The tornado flipped a school bus and injured the driver and several children. Since 1990, there have been just six other November tornado events in the state of Illinois, according to The Weather Channel's website.

In Wisconsin, the first November tornado in more than 39 years — which boasted an EF1 strength rating — struck Walworth County. Another was reported in Union Grove, Wis., but has not been confirmed. Only three November tornadoes have hit Wisconsin since 1950, two on Nov. 15, 1960, and one on Nov. 1, 1971. [Related: What Day Had The Most Tornado Strikes?]

The heaviest rains to hit parts of Colombia in four decades caused widespread flooding and triggered deadly landslides in early December. The landslide hit near the suburbs of Medellin and crushed around 50 houses and possibly killed hundreds of people. While the cause of the landslide and the exact number of fatalities is unclear, the La Niña weather phenomenon — a cooling in the central and eastern tropical Pacific Ocean that is the opposite phase of El Niño — has been blamed for the torrential rains.

The eventful year even went out with a bang, including massive rainstorms in Southern California and a blizzard in the Northeast.

A so-called “river in the sky” triggered severe storms across Southern California beginning on Dec. 16. The bearer of bad weather is what's called a "Pineapple Express" weather system. The system brought storms that were among the worst in a decade for the region. Governor Arnold Schwarzenegger declared a state of emergency in half a dozen Southern California counties as the torrential rainfall prompted evacuations and caused mudslides.

On the East Coast, just as Christmas was wrapping up, a howling two-day blizzard dumped knee-high snow across parts of the region, wrecking holiday travel. The long slog of digging out from under the snow is likely to last into the New Year.

This article was provided by OurAmazingPlanet, a sister site to LiveScience. Reach OurAmazingPlanet staff writer Brett Israel at bisrael@techmedianetwork.com. Follow him on Twitter @btisrael.