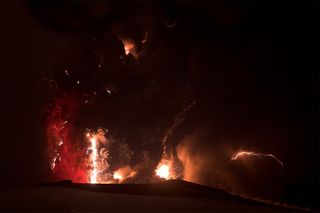 It may look like the special effects from a disaster movie, but the bolts of lightning photographed in the plume of the ash-spewing Icelandic volcano are real. Thing is, the process that creates volcano lightning remains a bit of a mystery.

Several photographers have taken pictures of the stunning light show shooting from the angry mouth of Eyjafjallajokull, which has been pumping a cloud of ash into the atmosphere for several days. In addition to the spectacular electric storm in its plume, the volcano has created colorful sunsets around the world with its ash, which has also hampered air travel over Europe.

Scientists have long known the plumes that shoot from the mouths of erupting volcanoes can produce sheaths of lightning. While lightning is typically associated with thunderstorms, hurricanes and other severe weather, the roiling debris clouds of volcanoes can also produce them.

The lighting in volcanic plumes is connected to the rotation that these plumes undergo, something like a tornado. As a plume rotates, it can spawn waterspouts or dust devils, which gather together the electric charges in the plume to form a sheath of lightning.

Scientists don't know exactly how lightning is created in an ash cloud, however. But they expect it's a result of particles rubbing together, generating friction and electrical charges.

When particles become charged during an eruption isn't known though, and scientists are just beginning to get a good look inside the plumes that generate the lightning — an unfriendly environment to be sure.

One such opportunity came with the eruption of Alaska's Mount Redoubt almost exactly a year ago. Redoubt's eruption also produced a lightning display that scientists were able to "see" through the dust and gas of the eruption with an array of sensors deployed at the volcano.

Several photographers were on hand to snap images of Eyjafjallajokull. Olivier Vandeginste was just outside the Iceland town of Hvolsvollur during some of the eruption and spent several hours photographing the spectacular lightning show.

"Truly a wonderful experience to see the lightning crawl around the lava eruption. A pity we couldn't get any closer," Vandeginste, who is still happily stuck in Iceland due to cancelled flights, told LiveScience.

Just how long Eyjafjallajokull will continue to belch ash into the air isn't known, though the volcano seems to have quieted down in the last few days. Icelandic geologists are keeping an eye on it and the island nation's many other volcanoes, including a neighbor of Eyjafjallajokull that has a history of copycat eruptions.