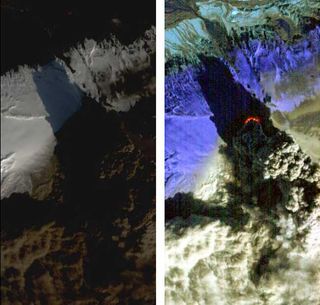 News reports earlier today that another volcano on Iceland had erupted just as Eyjafjallajokull was beginning to calm down turned out to be false. But scientists are warily keeping their eye on one of Eyjafjallajokull's neighbors, which has been known to erupt following its sister.

An MSNBC Twitter feed and one other news service ran reports that a volcano called Hekla had erupted on Iceland today. Those rumors turned out to be false, but even if Hekla had blown its top today, it would have been "purely coincidental," said Jay Miller, a volcano researcher at Texas A&M University.

But another, closer volcano, called Katla, has a history of going off whenever Eyjafjallajokull does. Three times in history when Eyjafjallajokull has erupted — in 926, 1621 and 1821 — Katla has too.

"What we have here is a historical coincidence," Miller told LiveScience — which could be just that, a coincidence. After all, Katla has erupted 22 times over that same period of history independently of Eyjafjallajokull. But Katla is a bigger volcano, with a bigger eruptive potential, "so that's why people are concerned," Miller said. Katla could also generate a similar ash plume to Eyjafjallajokull, which hampered air traffic across Europe last week and into this week.

There is some possibility that the connection between the eruptions of the two volcanoes is more than coincidence, because there is a sort of give-and-take relationship between the magma chambers that feed each volcano. Volcanoes explode because the pressure of the magma building up in the chamber forces it out, which then relieves the stress in the chamber; but what relieves stress in the one chamber could increase stress in a neighboring chamber. For now though, scientists don't know what might relate the two volcanoes.

Hekla is farther away from Eyjafjallajokull than Katla and is "probably the most active volcano in Iceland," Miller said. So if it happened to go off soon, it would likely be coincidence.

Iceland has an extensive monitoring system for its volcanoes, which are common features of the country's landscape and are ultimately responsible for the island's existence.

Icelandic geologists are monitoring Katla for any signs of ground swelling or micro-tremors, which could signify an impending eruption. So far though, there is no indication "that Katla is waking up," Miller said. Though he cautioned that volcanoes don't always let scientists know when they're about to blow.

"There may not be any warning," Miller said.