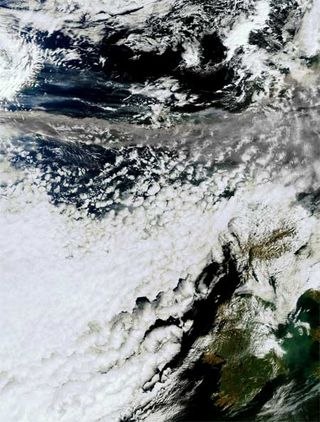 This image, acquired on 15 April 2010 by Envisat's Medium Resolution Imaging Spectrometer (MERIS), shows the vast cloud of volcanic ash sweeping across the UK from the eruption in Iceland, more than 1000 km away. The ash, which can be seen as the large grey streak in the image, is drifting from west to east at a height of about 11 km above the surface Earth.
(Image: © ESA)

The mushrooming cloud of ash from the eruption of the Eyjafjallajoekull volcano in Iceland has resulted in the closure of major airports throughout the U.K. and Scandinavia. The grounded flights make sense, as these super-heated plumes can do more than reduce visibility. They're downright hazards for airplanes.

"Basically, planes and volcanic ash don't mix," Elizabeth Cory, a spokesperson for the Federal Aviation Administration, said today. "When ash is ingested into the engine, it creates problems for the plane, such as engine failure."

The thing that makes volcanic plumes so dangerous is that they look extremely similar to regular clouds, visibly and on radar screens. Even when ash isn't visible to the human eye, it can still pose a threat to aircrafts because of the chemicals floating within volcanic plumes.

Airborne ash makes air travel extremely dangerous and difficult for several reasons, the number one being that when the air that gets sucked through an aircraft's jet engine is mixed with ash, it can cause engine failure.

The ash particles that make up volcanic clouds contain powder-size to sand-size particles of igneous rock material that have been blown into the air by an erupting volcano. The tiny particles instantly melt when faced with the internal temperature of an in-flight jet engine, which exceeds 1,832 degrees Fahrenheit (1,000 degrees Celsius). The particles then stick to the turbine vanes, which control air flow and using its energy to propel the plane. This buildup of melted ash particles can stop an engine completely.

In lesser cases, airborne ash can cause electrical difficulties and damage flight control systems. There is also the issue of diminished visibility, which can make it impossible for pilots to see their flight paths if they fly through a volcanic plume after mistaking it for a regular cloud.

While it might not be as common as encounters with fog, commercial flights have bumped up against volcanic ash from some of the giants, according to Boeing, including:

In fact, after several volcanic-ash encounters by 747s near Jakarta, Indonesia, the International Civil Aviation Organization (ICAO) initiated a volcanic ash effort in 1982. Since then, the Volcanic Ash Warnings Study Group, has worked to standardize the information provided to flight crews about volcanic eruptions.

For these reasons, airlines have to stay on the safe side and cancel flights until the ash particles settle - even if the airplane was to fly over an area thousands of miles away from the eruption site.