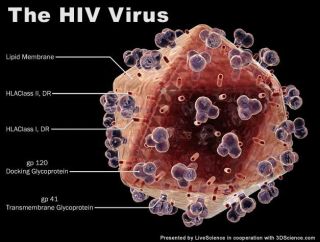 A 3-D rendering of the HIV virus with some of its key parts labeled.
(Image: © 3DScience.com)

Twenty-five years ago today, in the body of the world's first diagnosed AIDS case, the full capabilities and mysterious workings of a virus unfolded.

Three years later, in 1984, Luc Montagnier of the Pasteur Institute of Paris and Robert Gallo then of the National Cancer Institute announced their discovery of HIV, the virus that infects the human immune system and causes AIDS.

Even though the smallest viruses are only about one-millionth of an inch long, they live up to their Latin namesake—poison. They are capable of infecting and hijacking a human body, creating health hazards as minor as the common flu and as disastrous as the AIDS epidemic.

Proteins surround the package, which is called a capsid. Some viruses have an added layer of lipids that coat the capsid. Little extensions on the virus are called antigens, which help the virus hunt down the target host cell [3-D anatomy of HIV].

The diminutive nature of viruses, with the exception of the relatively gargantuan mimivirus , has made determining their looks difficult. The invention of the electron microscope in the 1940s first made viruses visible.

Scientists at Florida State University recently produced a new 3-D image of HIV and the protein spikes on its surface that match up with host cells. The pictures may help researchers better understand how the virus fuses with a host T-cell and inspire new ways to design vaccines.

"Until now, despite intensive study by many laboratories, the design details of the spikes and their distribution pattern on the surface of the virus membrane have been poorly understood, which has limited our understanding of how the virus infection actually occurs and frustrated efforts to create vaccines," said principal investigator and immunologist Kenneth Roux.

The findings were published this month in the online edition of the journal Nature.

Viruses prey upon all living organisms, turning them into virus Xerox machines.

Unlike a bacterium or a cell of an animal, a virus lacks the ability to replicate on its own. A virus does contain some genetic information critical for making copies of itself, but it can't get the job done without the help of a cell's duplicating equipment, borrowing enzymes and other molecules to concoct more virus.

"It's not a living organism," said immunologist Fabio Romerio of the Institute of Human Virology, founded and directed by Gallo. "It's simply a well organized molecular parasite."

Stuck in a microscopic purgatory somewhere between life and unlife, viruses can remain dormant for long periods of time.

On the long end of the time spectrum is a variant of the herpes virus, HHV6, that infects more than 97 percent of the population without causing serious health problems. Most of us are infected at a young age, which feels like a mild case of the flu. Afterwards, the virus can harmlessly stick with us for our lifetime.

HIV can also be dormant inside the body for months or even years. It can stealthily replicate at low levels, constantly producing a few new viral agents without killing the host cell.

By attaching to a host cell and forcing the cell to follow its genetic orders, a virus can turn a host into a viral army-making machine.

For example, a protein called GP120 sits on the surface of HIV and allows the virus to attach to the target cell. GP120 binds to two proteins on the cell. After the proteins connect, the virus delivers its genetic material into the cell.

HIV only has a limited number of proteins, so it relies on the host cell's proteins to synthesize new genetic material, including more GP120, and regulate its replication.

Viruses come prepared with various amounts and types of genetic material. Some viruses carry double-stranded DNA, while others, like HIV, have only a single strand of RNA. The kind of genetic material a virus carries determines how the replication process works inside the host cell.

In the case of HIV, each infiltrated cell produces and spits out hundreds of new viral particles. The whole hostile takeover, from the time when HIV attaches itself to a host cell and releases new HIV progeny, takes one to two days.

If HIV production is vigorous, it kills the cell immediately. Otherwise, the cell will survive just a few more days.

More than just a virus

Viruses wreak havoc in other ways as well. Some viruses have been linked to diseases .

Researchers have suggested that a specific variant of herpes virus may cause the neurogenerative disease multiple sclerosis.

A number of viruses have been proven to cause cancer. Human T-cell leukemia viruses, HTLV1 and HTLV2, infect blood cells and cause several diseases, including a rare cancer of the immune system's own T-cells.

The human papillomavirus (HPV) is known to cause cervical cancer. A new vaccine to protect against HPV is currently waiting approval by the U.S. Food and Drug Administration (FDA). The FDA plans to announce its decision later this week.

Vaccines jump-start the human immune system by teaching it how to produce protective shields, called antibodies, to battle a specific virus.

Each year, millions of Americans roll up their sleeves for a shot of flu immunity. The shots occur annually because, as the flu travels around the globe, it mutates into new strains. Researchers work to stay ahead of the flu, creating new vaccines to combat each year's version. In order to keep up our immunity, we must continue getting shots in the arm.

HIV doesn't come in annual waves. Instead, it mutates rapidly within the body.

Because its genetic material is composed of RNA, scientists consider HIV a retrovirus. The copying process for retroviruses requires many steps, and leaves a lot of room for error. Some mistakes render the virus copies harmless, while other mistakes help strengthen the virus.

Making vaccines that keep up with all of these mutations is a challenge for researchers.

"A vaccine should be effective against all possible variants of the virus," Romerio said.

Because HIV is a relatively young human virus, scientists know less about it than other, longer-lived viruses.

Scientists do know that part of HIV's success lies in its target choice—the immune system, typically responsible for defending a body from a virus.

The virus infects the CD4 T-cell, a key player in our immune systems. They're in charge of regulating the duration and strength of a person's immune response. Romerio likens these T-cells to a quarterback on a football team.

"They're the brain of the immune system," Romerio said.

However, there's a paradox that scientists have yet to understand. Although HIV only infects 2 to 5 percent of a person's T-cells, all of the immune cells appear impaired under a microscope.

Even though the star quarterback is sick with the flu, his seemingly healthy substitutes can't seem to play the game either, Romerio explained. None of them can throw the ball or tell their teammates how to play.

"We're hoping to come up with new strategies for restoring the immune system to fight HIV," Romerio told LiveScience. "It's an important component of the vaccine. It needs to defend against HIV, and also teach the antibodies how to eliminate the virus.

"Since the discovery of the virus, we have learned a lot about the virus and how it gains access to cells and how it works," Romerio explained. "But I think we still do not have the key piece of the puzzle that would allow us to figure out exactly what happens when HIV infects human beings. We need a fundamental understanding of how HIV interacts with the human immune system."