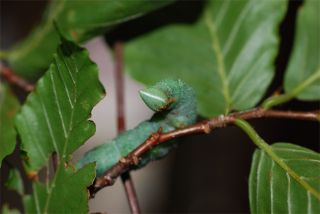 The walnut sphinx caterpillar, a type of moth larva, can whistle out holes in its side, noises that can fend off attacking birds.
(Image: © Jayne Yack.)

Caterpillars apparently can whistle, letting out squeaks that can fend off attacking birds, scientists have now found.

They don't whistle by puckering their lips and blowing, since they don't have lips. Instead, they blow out their sides, researchers said.

Scientists have known for more than 100 years that many caterpillars can generate clicking or squeaking noises. However, researchers have only recently begun to experimentally investigate how these noises are made and what roles they might play.

Neuroethologist Jayne Yack at Carleton University in Ottawa had shown that silk-moth caterpillars (Antheraea polyphemus) make clicking sounds by snapping their mandibles together. Now she and her colleagues for the first time have revealed that walnut sphinx caterpillars (Amorpha juglandis) can toot from their sides.

Using high-speed video, the researchers noticed they pulled their heads back to compress the body cavity while they whistled. Unlike reptiles, birds and mammals, insects don't breathe using their mouths, but with holes in their sides known as spiracles, and the scientists reasoned they were forcing air out these holes to whistle, generating squeaking noises.

To confirm their idea, researcher Veronica Bura at Carleton University gently applied latex over all eight pairs of the caterpillars' abdominal spiracles and then uncovered each pair systematically while pinching the larva. The whistles definitely came from the eighth pair, generating trains of whistles lasting up to four seconds each, and spanning frequencies that ranged from those audible to birds and humans up to ultrasound.

"These birds are clearly startled by the unexpected sounds coming out of this caterpillar," Yack told LiveScience. "They dove for cover."

The sounds are probably not advertising that the walnut sphinx caterpillars are distasteful. The birds simply appear to be startled, "because these sounds are unexpected," Yack said.

The scientists detailed their findings online Dec. 10 in the Journal of Experimental Biology.

Civilized Caterpillars Talk With Their Butts