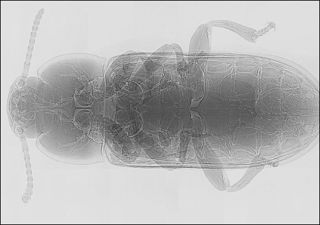 An X-ray of the yellow mealworm beetle Tenebrio molitor. Note the system of white tubes or tracheae running through its body.
(Image: © Alexander Kaiser, collected at Argonne National Laboratory)

X-rays that effectively peel away the opaque outer-cover off beetles have revealed the bugs have a more complex breathing apparatus at work than previously suspected.

Despite their relatively small body size, insects need more than a simple, mini-respiratory system to suck in enough oxygen to carry out basic processes such as scuttling around.

Results from a recent study reveal that rather than air just passively flowing in and out, a graceful inflation and deflation of tracheal tubes helps shuttle oxygen through the bodies of ground beetles.

“These tubes are being compressed in rhythmic fashion, and in this species it happens in the course of a second,” said researcher Jake Socha of Argonne National Laboratory in Illinois. Socha presented the research at a meeting of the American Physiological Society (APS) in Washington, D.C. last month.

"Tracheal compression,” analogous to breathing in humans and other vertebrates, might be choreographed by a muscle pump of sorts the research suggests.

Beetles breathe in a way that is already fairly sophisticated, using up to 18 tiny openings, called spiracles, that dot the middle and hind part of their bodies. When the pores open, oxygen-rich air can diffuse into tracheal tubes hooked up to the holes. The oxygen then gets shuttled through thousands of interconnected and branching tubes and dumped into cells. The waste product, carbon dioxide, then travels through the tubes and out the holes.

“There’s a fundamental problem with the gas-exchange system design, and this is an issue of scale,” Socha said.

What he means is that as an animal gets bigger, its volume increases more than its surface area, and the same holds for its cells. Gas molecules get into the cells through the surface, so the size of this “entrance” directly affects how much oxygen can move in and out.

“If you look at a single cell, as the cell gets larger diffusion isn’t going to work to get oxygen into the cell because diffusion only goes a certain distance,” said Scott Kirkton of Union College in New York. Kirkton studies insect respiration but was not involved in this beetle study.

This random movement of oxygen molecules, called diffusion, can only carry the incoming air so far and then it’s up to mechanical processes to pick up the slack. “As the surface area to volume ratio gets smaller, you’re not going to be able to get [oxygen] in. You need to have some other way to transport it,” Kirkton told LiveScience.

Recent studies have shown that insects, including beetles, dragonflies and cockroaches, employ active body movements to ensure tip-top respiration. Some pump their wings to eschew air in and out of their bodies while others squeeze their bellies to pull in the needed oxygen. The mechanisms all fall under the umbrella of convection, or bulk movement of air.

Until now, the inner workings of insects, from dragonflies to tiny beetles , have been off limits to human eyes. “Mainly because insects are opaque, you can’t see what’s going on with these tubes,” Socha said.

A technique that relies on high-powered X-ray beams has allowed scientists like Socha an under-the-hood view of living, breathing beetles.

In the recent study, Socha and his colleagues collected ground beetles from a local forest and taped each to a tiny mount. Then, they placed the beetles on a spot in a circular particle accelerator called the Advanced Photon Source at Argonne National Laboratory. The accelerator revs up electrons to near the speed of light, a process that generates X-rays that are a billion times more powerful than the kind used in hospitals.

The result was a video showing “pencil outlines” of the hair-thin breathing tubes. The tiny tubes squeezed and released in a pattern of undulations that started in a perfectly timed cycle. “So in a second you have deflation and then rapid re-inflation. It appears to be happening everywhere at once,” Socha said.

They noticed a bizarre pattern of tiny indentations along each tube as the animal inhaled and exhaled. “These compressions appear to be these football-shaped dimples that are being pushed into the tracheal tubes,” Socha said.

The scientists are not certain how exactly these compressions are helping the beetle. “The squeeze out may speed up the flow of fresh air in, aiding oxygen exchange,” Socha explained. Another idea is that by moving carbon dioxide out quicker, the spiracles would open for only a short time, which would decrease water loss from the pores. “Or it may simply move air within the body,” Socha said.