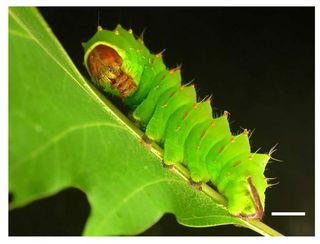 The common silkmoth caterpillar deters predators by clicking its mandibles at them, a new study suggests. The clicks serve as warning that the caterpillar will release a foul brown fluid.
(Image: © Sarah Brown)

Caterpillars can fend off hungry birds and other predators by clicking at them, scientists now report. These clicks warn that the caterpillars will be unsavory to eat—at least, after they regurgitate a foul brown fluid.

To understand the clicking and barfing, neuroethologist Jayne Yack at Carleton University in Ottawa headed up a study of green-colored common silkmoth caterpillars (Antheraea polyphemus).  They mostly rely on camouflage for protection, using clicks and regurgitation as last resorts. The upchucked fluid, and the advance clicking warning, are definitely effective deterrents, she said.

During the course of the research, Yack brought bins of the caterpillars home during weekends and holidays when no one on campus was available to care for them.

"My cat got into a caterpillar bin at my house once," Yack recalled. "When I got home, there was a caterpillar that was still alive outside the bin with a long string of regurgitant trailing from it, and my cat was gagging. For years after that, whenever my cat saw a caterpillar, she started gagging. There's a strong learning component there, and the sounds can help with that."

Mystery of the clicks

Scientists have known for more than 100 years that many caterpillars can generate clicking, squeaking or crackling sounds audible to the human ear, but none until now had experimentally investigated how these noises are made or what roles they might play.

The clicker studied by Yackwith former graduate student Sarah Brown and their colleagues— A. polyphemus—feeds on oak, maple, willow, birch and other leaves throughout North America. This large, green caterpillar [image] can use camouflage to hide from predators among the leaves it grazes on, so why it made sounds that might draw attention to it was a mystery that intrigued the researchers.

A century ago, naturalists found the caterpillar kept perfectly quiet on its own, but made clicking sounds resembling the ticking of a watch when lifted or when someone touched  its cage. To learn whether or not these sounds were defensive, the researchers simulated biting attacks by birds or insects with pinches to the heads of A. polyphemus specimens using forceps, and also exposed the crawlers to live chickens.

Audio and video recordings confirmed the caterpillars generated the clicks by snapping their mandibles, which are covered with serrated, tooth-like ridges. Given their soft bodies, "they don't have much other than their mandibles to scrape together to make sounds," Yack explained.

After clicking, the caterpillars often regurgitated a foul brown fluid. The scientists found that the more forceps pinches that caterpillars received, the more they clicked, the longer the clicks were and the more likely they were to regurgitate. The clicks proved loud over short distances but didn't carry far.

Chicken pecks, which proved more forceful than the forceps pinches, led to even more clicking and regurgitation. All the caterpillars survived the chicken attacks.

These findings suggest the clicks are signals from the caterpillar that attacks will trigger an unsavory chemical defense. "Chemical defenses are costly to produce, and the caterpillar doesn't want to use it unless it absolutely has to, so it prefers giving a warning first," Yack explained. In fact, if there is any regurgitated fluid left around its mouth, the caterpillar will suck it back in.

In experiments on 12 other species, Yack and her colleagues found two of them—the tobacco hornworm (Manduca sexta) and caterpillars of the luna moth (Actias luna)—also made clicking noises and regurgitated, suggesting these defenses might be common among caterpillars.

In future studies, "we would like to confirm that the sounds alone will deter an experienced predator," Yack told LiveScience. She and her colleagues also plan to investigate the composition of the regurgitated fluid, which could shed light on whether the caterpillar synthesizes the defensive compounds itself or whether it acquires them from plants it eats.

The scientists detailed their findings March 2 in the Journal of Experimental Biology.