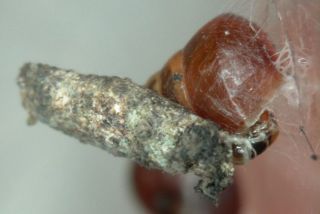 A species of snail-eating caterpillar from Maui. You can see how the caterpillar has used silk, like a spider, to pin down its snail prey. Having rendered the snail helpless and immobile, the caterpillar is entering the snail's shell to being feeding on its soft flesh. [Image Â© Science]

Predatory caterpillars are very rare -- only a few other species are known in the world. Of the 150,000 species of moths and butterflies known worldwide, only about 200 are predatory.

This newly described species, Hyposmocoma molluscivora, is the only known moth or butterfly larva to eat shelled animals like snails. The caterpillars are small -- only about eight millimeters -- and lug their silk casings from leaf to leaf.

This discovery Daniel Rubinoff and William Haines of the University of Hawaii is published in the July 22 issue of the journal Science.

The caterpillars are strictly meat eaters -- they don't eat plants even when starving.

They take a page from the spider handbook of hunting, using silk otherwise designed for cocoon-making to snag their snail snacks. When a hungry caterpillar runs into an unsuspecting snail on a branch or leaf, the caterpillar immediately begins to attach the snail to the leaf with silk webbing.

The webbing apparently prevents the snail from sealing itself against attack or fleeing by dropping to the ground. Next, the caterpillar wedges its case next to or inside the opening of the snail's shell.

It stretches its body out from the case, and corners the snail in the back of its own home. There is no place for the snail to run or hide as the caterpillar eats it alive, leaving nothing but an empty shell.

And that's not even the trickiest part. Many caterpillar casings were observed to have the tiny shells stuck to them, probably as camouflage.

The new caterpillars join a collection of unusual insects native only to Hawaii. Ambush caterpillars, damselflies with nymphs that live on the ground, and spiders that spear their prey in flight are all examples of Hawaiian insect oddities.

The Hawaiian island chain is the most isolated land mass in the world, and the authors say this discovery provides further evidence for how species isolation leads to the evolution of unusual hunting strategies and other traits.

Although these caterpillars have only been recently discovered, it's possible they may not be around for long. Current widespread destruction of lowland habitats and the wiping out of large numbers of native Hawaiian plant species could lead to the caterpillar's extinction.

Today, some of the last bits of the forests these snail-eating caterpillars call home are located in nature preserves.