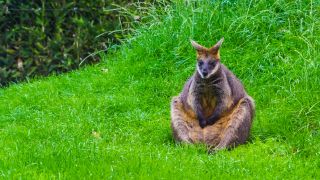 Pregnancy can sometimes feel like it lasts forever, but for an Australian marsupial called a swamp wallaby (Wallabia bicolor), pregnancy truly never ends.

Researchers recently discovered that female wallabies can conceive while still pregnant, implanting a new embryo — or two — days before giving birth to an existing fetus — or two.

This creates a cycle of perpetual pregnancy that persists throughout the wallabies' lives as sexually mature adults. It's also a reproductive strategy that is one of a kind among mammals, scientists reported in a new study.

Swamp wallabies, which stand about 2 feet (70 centimeters) tall, are native to eastern Australia, where they live in forests and swamps. They become sexually mature at 15 months old, can breed year-round and have a gestation period that lasts 33 to 38 days, according to the University of Michigan's Museum of Zoology.

However, the wallabies' estrus cycle is only 31 days long, scientists wrote in the new study, published online March 2 in the journal Proceedings of the National Academy of Sciences.

Mammalian reproduction includes four stages: ovulation, fertilization, pregnancy and lactation. In a group of marsupials called macropodids, which includes kangaroos and wallabies, certain species experience ovulation shortly after birth — sometimes within hours, the study authors wrote. Because swamp wallabies' estrus cycle is shorter than their gestation period, researchers had long suspected that mating and conception for these animals might overlap with pregnancy.

To find out if that was the case, scientists with Australia's University of Melbourne and the Leibniz Institute for Zoo and Wildlife Research in Berlin collected vaginal smears and conducted high-resolution ultrasounds of pregnant wallabies.

They found that 90% of the pregnant females were actually doubly pregnant, carrying a second embryo fertilized from ovulation that took place when their full-term fetus had already completed 97% to 100% of its gestation.

But the fetuses weren't womb-mates. Marsupial females have twin uteri (along with three vaginas). This means that a pregnant swamp wallaby, days away from delivering a fetus in one uterus, can ovulate, mate and develop a newly fertilized embryo in her second uterus.

However, that second fetus doesn't start developing yet, according to the study. Marsupials deliver their young at a much earlier developmental stage than other mammals, and their joeys have months of lactation and growth ahead of them. While the newborn is nursing the embryo is "paused" in the womb, and its development doesn't begin until lactation of its sibling ends and the baby leaves their mother's pouch.

"These results clearly demonstrate that the swamp wallaby conceives a new embryo before birth," the scientists wrote. This reproduction strategy "completely blurs the normal staged system of reproduction in mammals."