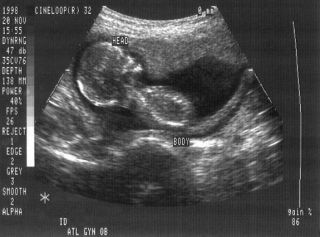 A fetus at 4 months seen via ultrasound.
(Image: © CDC)

Ultrasound imaging, or sonography, is the use of high-frequency sound waves to visualize soft tissues such as internal organs. The procedure is capable of generating real-time images that reveal movement of the tissues or blood flow, according to the U.S. Food and Drug Administration.

An ultrasound machine consists of a handheld device that produces ultrasonic sound waves (above the range of human hearing) that reflect off different layers of body tissue. The transducer converts the echoes into electrical signals that are used to create an image and display it on a screen. The image is based on the frequency and strength of the sound signal and the time it took for the echoes to return, according to the FDA.

"Ultrasound imaging has many uses in medicine, from confirming and dating a pregnancy to diagnosing certain conditions and guiding doctors through precise medical procedures," said Dr. Kristin Byrne, chief of breast imaging at Lenox Hill Hospital in New York City.

Obstetric ultrasound is a technique used during pregnancy to create images of a human fetus. The procedure is used to monitor an unborn baby's health and detect potential problems.

Ultrasound is used to detect ovulation and diagnose pregnancy. At weeks four to five of a pregnancy, it's used to determine a due date or check for problems. At weeks six to seven, ultrasound can detect a fetal heartbeat and find out if it's a multiple pregnancy (i.e., twins, triplets, etc.). At weeks eight to nine, arm and leg buds may be visible. At weeks 10 to 18, more detail can be seen. At weeks 19 to 21, parents can find out the baby's gender. At week 31, the baby is so big that only parts of it are visible. And at week 35 to 37, doctors can check the baby's position (head down or breech) or perform a nonstress test, also known as fetal heart rate monitoring.

The advantage of ultrasound over other forms of imaging, such as CT scans and X-rays, is that it doesn't use ionizing radiation, which can be harmful to a fetus, said Malcolm Nicolson, a medical historian at the University of Glasgow in Scotland who wrote a history of fetal ultrasound. Magnetic resonance imaging (MRI) is occasionally used, but it's much more expensive and less portable than ultrasound, and requires sitting in a noisy, confined space for up to 40 minutes.

Ultrasound was developed by obstetrician Ian Donald and engineer Tom Brown, who first used it clinically in 1956 in Glasgow, Scotland. In the 1970s, British and American hospitals started using it, and it has now become routine throughout the developed world, Nicolson said. The technique is believed to be safe, but there are limits on the amount of energy that can be used.

Ultrasound is also used to diagnose a wide variety of conditions that affect the organs and soft tissues of the body, including the heart and blood vessels, liver, gallbladder, spleen, pancreas, kidneys, bladder, uterus, ovaries, prostate, thyroid, testicles and breast.

"You can see images in real time, as opposed to a single snap-shot image such as [an] X-ray image," Byrne said. "This means that we can see the heart beating, the arteries pulsating and the bowel’s peristalsis [the waves of muscle contraction that move food through the digestive tract]."

With ultrasound, doctors can easily reposition the patient during imaging, which is especially important when checking for the movement of gallstones, for example.

The development of transvaginal ultrasound involves placing a probe in the vagina instead of on the abdomen. The procedure may be used to investigate abnormalities such as cysts or fibroid tumors, abnormal vaginal bleeding and other menstrual problems, infertility, ectopic pregnancy or pelvic pain, according to the National Institutes of Health (NIH).

Another use of the technology, called Doppler ultrasound, is a noninvasive method of measuring blood flow and blood pressure by bouncing ultrasound waves off red blood cells. It can be used to diagnose a variety of conditions, including blood clots, defective heart valves or blocked arteries. The procedure can also be used during pregnancy to check on blood flow to the fetus through the placenta.

As the use of ultrasound has evolved, there have been significant changes in image quality, Byrne noted. "Recently, there has been an emphasis on mobility and ease of access," she said.

For example, some companies are producing wireless transducers with smaller, higher-quality screens. While ultrasound traditionally has been used to create 2D images, more recently, engineers have developed 3D ultrasound, which produces nonmoving 3D images by beaming sound waves at an angle to the tissue. 4D ultrasound is similar to 3D ultrasound, except it produces 3D images in real time.

Another new development is sonoelastography, which uses a typical ultrasound machine to measure tissue stiffness. By giving physicians the ability to see stiffer and softer areas inside of the tissue, sonoelastography will help doctors gauge liver fibrosis, monitor thyroid nodules, lymph nodes and indeterminate breast lumps, and detect prostate cancer, none of which can be done with conventional ultrasound, Byrne said.

The use of chemicals to enhance contrast, known as contrast agents, is also a recent development in ultrasound. So-called contrast-enhanced ultrasound (CEUS) improves the sensitivity for tumor detection. The technology is available in Canada, Australia, China and Europe, but not in the United States, except in echocardiography (images of the heart generated by sound), Byrne said.