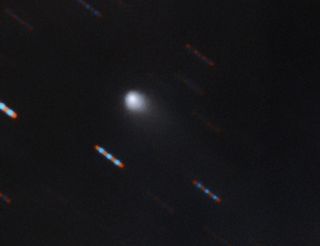 At first, it was just another bright, fuzzy speck in the sky. But it may turn out to be something much more exciting: the second known object to hurtle through our solar system after leaving another system.

Astronomers will need a lot more observations before they can be confident giving the comet that title, but early data about the object seems promising. That would make the comet, currently known as Comet C/2019 Q4 (Borisov) after the person who first spotted it, the first traveling successor to the interstellar object 'Oumuamua, which was discovered in October 2017.

"Based on the available observations, the orbit solution for this object has converged to the hyperbolic elements shown below, which would indicate an interstellar origin," read the Minor Planet Electronic Circular about the object.

Such a statement is issued on behalf of the International Astronomical Union by the Smithsonian Astrophysical Observatory when observers have registered enough data about an object to begin calculating its path through space.

The vast majority of asteroids and comets that astronomers have tracked to date follow an elliptical orbit: oval or egg-shaped or nearly circular. These objects spend eons looping through the solar system, perhaps kicked around a bit after straying too close to a planet and getting tugged off course. They were made in our solar system and remain trapped here, pacing around the sun's mass.

But as the Minor Planet Electronic Circular noted, for C/2019 Q4, the data so far suggest that its path is a hyperbola, with the object arcing in from beyond our solar system and destined to leave the neighborhood again soon. That's a trajectory scientists have so far seen only from 'Oumuamua, although estimates suggest that these visitors should charge through our solar system fairly regularly. (A few months ago, scientists suggested a meteorite that hit Earth in 2014 may also have been interstellar.)

A Ukrainian skywatcher named Gennady Borisov made the first sighting of C/2019 Q4, on Aug. 30, and caught sight of it again two days later. Since then, six other astronomers have filed observations to the Minor Planet Center's data hub, which houses the Minor Planet Electronic Circular. The data cover Aug. 30 to Sept. 8.

Here's an image of the possible interstellar comet, taken by G. Borisov, who discovered it. (HT @TM_Eubanks) pic.twitter.com/gK22iSfR43September 11, 2019

Astronomers hope that those sightings will soon have plenty of company. "Further observations are clearly very desirable, as all currently available observations have been obtained at small solar elongations and low elevations," the circular continued.

And there should be plenty of opportunities for observers to gather more data about C/2019 Q4. The search may need to pause for a month or so because of the object's proximity to the sun, but Borisov spotted the comet early enough in its journey that astronomers should be able to study it for at least a year, according to the circular. That's in stark contrast to 'Oumuamua, which was already waving goodbye to our solar system when scientists spotted it.

Comet C/2019 Q4, in contrast, is the kind of interstellar candidate that the European Space Agency (ESA) hopes to study via a mission called Comet Interceptor in just a few years. That mission consists of a trio of spacecraft that ESA wants to send to an Oort Cloud object or an interstellar object, depending on what observations are available as planning progresses.

According to a statement from ESA, C/2019 Q4 is a couple miles (a few kilometers) across and will pass closest to the sun, about 186 million miles (300 million km) away from the sun, in early December. That's about twice the average distance between Earth and the sun.