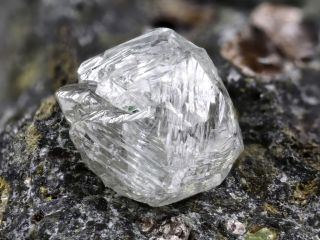 A single grain of rock lodged in a diamond contains a never-before-found mineral.

And that newfound substance could reveal unusual chemical reactions unfolding in the depths of the mantle, the layer of Earth that lies between the planet's crust and outer core.

Scientists unearthed the mineral from a volcanic site in South Africa known as the Koffiefontein pipe. Shining diamonds speckle the dark, igneous rock that lines the pipe, and the diamonds themselves contain tiny bits of other minerals from hundreds of miles beneath Earth's surface. Within one of these sparkling stones, scientists found a dark green, opaque mineral that they estimated was forged about 105 miles (170 kilometers) underground.

They named the newfound mineral "goldschmidtite" in honor of acclaimed geochemist Victor Moritz Goldschmidt, according to the study, published Sept. 1 in the journal American Mineralogist.

The entire mantle is about 1,802 miles (2,900 km) thick, according to National Geographic, which makes the layer's lowermost regions difficult for scientists to study. The intense pressure and heat in the upper mantle transform humble carbon deposits into sparkling diamonds; the rocks trap other mantle minerals in their structures and can be pushed to the planet surface by underground volcanic eruptions. By analyzing mineral inclusions in the diamonds, scientists can take a peek at chemical processes that occur far beneath the crust.

The study authors noted that, for a mantle mineral, goldschmidtite has a peculiar chemical composition.

"Goldschmidtite has high concentrations of niobium, potassium and the rare-earth elements lanthanum and cerium, whereas the rest of the mantle is dominated by other elements, such as magnesium and iron," study co-author Nicole Meyer, a doctoral student at the University of Alberta in Canada, said in a statement. Potassium and niobium make up most of the mineral, meaning the relatively rare elements were brought together and concentrated to form the unusual substance, despite other nearby elements being more abundant, she said.

"Goldschmidtite is highly unusual for an inclusion captured by diamond and gives us a snapshot of fluid processes that affect the deep roots of continents during diamond formation," mantle geochemist Graham Pearson, Meyer's co-supervisor, said in the statement. The odd mineral now lies in the Royal Ontario Museum in Toronto, Meyer told Live Science in an email.