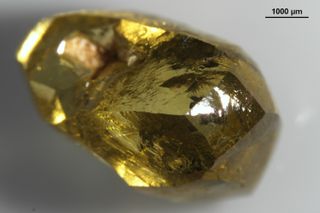 A roughly cut diamond from Sierra Leone that has sulfur-containing mineral inclusions in it.
(Image: © Karen Smit/GIA)

Tiny flaws in diamonds hold the secret to the formation of the first continents.

In a new study, researchers used inclusions — imperfections derided by jewelers but valuable to scientists — to trace diamond formation. They found that the sulfide minerals inside the inclusions were last at the surface of the planet 2.5 billion years ago, before the rise of oxygen in the atmosphere.

The findings reveal the history of the continents and mantle where the diamonds form, said study leader Karen Smit, a research scientist at the nonprofit Gemological Institute of America. The diamonds in the study, found in West Africa, indicate that the ancient continents in that region formed by subduction, a process in which one slab of crust pushes under another. [Photos: Rare Diamonds Make US Debut at LA Natural History Museum]

"We can track through 2.5 billion years of Earth history just through this one sulfide inclusion," Smit told Live Science.

Diamonds form deep in the mantle. Most, Smit said, form around 125 miles (200 kilometers) deep, and some form even deeper, around 250 to 435 miles down (400 to 700 km). The deepest hole ever drilled, the Kola Superdeep Borehole in Russia, only penetrated 7.6 miles (12 km). Diamonds are then brought to the surface fairly rapidly via deep volcanic eruptions.

Smit and her colleagues were studying the nitrogen in diamonds from the Zimmi region of Sierra Leone when they noticed that speck-size inclusions of sulfides in the diamonds showed signs of having existed in the mantle before the diamonds formed, meaning they were trapped within the crystallizing diamonds and carried up to the surface with them. They began investigating the isotopes of sulfur within the inclusions. Isotopes are variations of atoms with differing numbers of neutrons in their nuclei.

What they found revealed that the inclusions were very old indeed. Oxygen shields the sulfur from certain reactions with ultraviolet light, so researchers can tell whether sulfur formed in an oxygen-rich or low-oxygen environment. These isotopes formed in the atmosphere before there was much oxygen in the atmosphere, around 2.5 billion years ago, Smit said. The diamonds themselves are much younger than that, and formed around 650 million years ago.

A history of continents

The researchers then examined similar inclusions in diamonds from Canada's Ekati mine. These inclusions are 3.5 billion years old and do not have the same isotope signals as the West African diamonds. The contrast tells a story about how the continents formed, Smit said. Early on, continents probably formed from melting mantle that oozed upward in the form of basalt, similar to how Iceland or Hawaii form today. The minerals in this crust formed in the mantle, not in contact with the atmosphere.

Later in Earth history, though, subduction became important for forming stable continents. One chunk of crust would grind under another; denser material would sink and less-dense material would rise to form continental crust. This is how the sulfur in the West African diamonds would have gotten deep beneath the surface, Smit said.

The most stable, long-lasting crust is attached to portions of the mantle called "keels," so named because they stabilize crust just as a keel stabilizes a ship. More studies of inclusion-rich diamonds could help explain how and why these keels form, Smit said. So far, there are only four locations around the world, including West Africa and Canada, with diamonds that contain both sulfide inclusions and minerals used to date the diamonds' formation. More locations would help trace Earth's history in more detail, Smit said, but these studies are challenging because the diamonds are destroyed in the process of analysis.

"We need diamonds," Smit said, "to destroy for science."