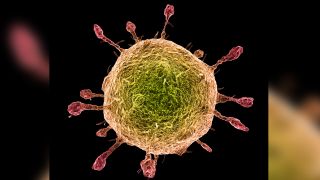 The coronavirus particle has a crown of spikes on its surface.
(Image: © Alfred Pasieka/Science Photo Library via Getty Images)

Editor's note: Updated March 25 with the latest information on COVID-19.

The new coronavirus causing COVID-19 has led to more than 454,000 illnesses and more than 20,550 deaths worldwide. For comparison, in the U.S. alone, the flu (also called influenza) has caused an estimated 38 million illnesses, 390,000 hospitalizations and 23,000 deaths this season, according to the Centers for Disease Control and Prevention (CDC).

That said, scientists have studied seasonal flu for decades. So, despite the danger of it, we know a lot about flu viruses and what to expect each season. In contrast, very little is known about the new coronavirus and the disease it causes, dubbed COVID-19, because it's so new. This means COVID-19 is something of a wild card in terms of how far it will spread and how many deaths it will cause.

"Despite the morbidity and mortality with influenza, there's a certainty … of seasonal flu," Dr. Anthony Fauci, director of the National Institute of Allergy and Infectious Diseases, said in a White House press conference on Jan. 31. "I can tell you all, guaranteed, that as we get into March and April, the flu cases are going to go down. You could predict pretty accurately what the range of the mortality is and the hospitalizations [will be]," Fauci said. "The issue now with [COVID-19] is that there's a lot of unknowns." (During the week ending March 14, 15.3% of tests for a respiratory illness turned out positive for flu, compared with 21.1% the week prior.)

Scientists are racing to find out more about COVID-19, and our understanding of the virus that causes it and the threat it poses may change as new information becomes available. Based on what we know so far, here's how it compares with the flu.

Both seasonal flu viruses (which include influenza A and influenza B viruses) and COVID-19 are contagious viruses that cause respiratory illness.

Typical flu symptoms include fever, cough, sore throat, muscle aches, headaches, runny or stuffy nose, fatigue and, sometimes, vomiting and diarrhea, according to the CDC. Flu symptoms often come on suddenly. Most people who get the flu will recover in less than two weeks. But in some people, the flu causes complications, including pneumonia. So far this flu season, about 1% of people in the United States have developed symptoms severe enough to be hospitalized. And the overall hospitalization rate in the U.S. this season is 61 hospitalizations per 100,000 people.

With COVID-19, doctors are still trying to understand the full picture of disease symptoms and severity. Reported symptoms in patients have varied from mild to severe, and can include fever, cough and shortness of breath, according to the CDC.

In general, studies of hospitalized patients have found that about 83% to 98% of patients develop a fever, 76% to 82% develop a dry cough and 11% to 44% develop fatigue or muscle aches, according to a review study on COVID-19 published Feb. 28 in the journal JAMA. Other symptoms, including headache, sore throat, abdominal pain, and diarrhea, have been reported, but are less common. A less common symptom, loss of smell, has also been reported in some COVID-19 patients, Live Science reported.

Another recent study, considered the largest on COVID-19 cases to date, researchers from the Chinese Center for Disease Control and Protection, analyzed 44,672 confirmed cases in China between Dec. 31, 2019 and Feb. 11, 2020. Of those cases, 80.9% (or 36,160 cases) were considered mild, 13.8% (6,168 cases) severe and 4.7% (2,087) critical. "Critical cases were those that exhibited respiratory failure, septic shock, and/or multiple organ dysfunction/failure," the researchers wrote in the paper published in China CDC Weekly.

A recent study of COVID-19 cases in the United States found that, among 4,226 reported cases , at least 508 people, or 12% were hospitalized. However, the study, published March 18 in the CDC journal Morbidity and Mortality Weekly Report (MMWR) is preliminary, and the researchers note that data on hospitalizations were missing for a substantial number of patients.

The death rate from seasonal flu is typically around 0.1% in the U.S., according to The New York Times.

Though the death rate for COVID-19 is unclear, most research suggests it is higher than that of the seasonal flu.

In the study published Feb. 18 in the China CDC Weekly, researchers found a death rate from COVID-19 to be around 2.3% in mainland China. Another study of about 1,100 hospitalized patients in China, published Feb. 28 in the New England Journal of Medicine, found that the overall death rate was slightly lower, around 1.4%.

A report published March 13 in the journal Emerging Infectious Diseases adjusted for the potential time delay between hospitalization and death among cases in China. The authors estimated that, as of Feb. 11, the death rate from COVID-19 was as high as 12% in Wuhan, 4% in Hubei Province and 0.9% in the rest of China.

In the CDC's MMWR study, 45% of hospitalizations, 53% of admissions to the intensive care unit (ICU), and 80% of deaths associated with COVID-19 were among adults aged 65 years and older.

The measure scientists use to determine how easily a virus spreads is known as the "basic reproduction number," or R0 (pronounced R-nought). This is an estimate of the average number of people who catch the virus from a single infected person, Live science previously reported. The flu has an R0 value of about 1.3, according to The New York Times.

Researchers are still working to determine the R0 for COVID-19.  Preliminary studies have estimated an R0 value for the new coronavirus to be between 2 and 3, according to the JAMA review study published Feb. 28. This means each infected person has spread the virus to an average of 2 to 3 people.

It's important to note that R0 is not necessarily a constant number. Estimates can vary by location, depending on such factors as how often people come into contact with each other and the efforts taken to reduce viral spread, Live Science previously reported.

The CDC estimates that, on average, about 8% of the U.S. population gets sick with the flu each season.

As of March 19, there are 9,415 cases of COVID-19 in the U.S. Some parts of the country have higher levels of activity than others, but cases have been reported in all 50 states, according to the CDC.

The immediate risk of being exposed to COVID-19 is still low for most Americans, however, as the outbreak expands, that risk will increase, the CDC said. People who live in areas where there is ongoing community spread are at higher risk of exposure, as are healthcare workers who care for COVID-19 patients, the agency said.

The CDC expects that widespread transmission of the new coronavirus will occur, and in the coming months, most of the U.S. population will be exposed to the virus.

It's important to note that seasonal flu, which causes outbreaks every year, should not be confused with pandemic flu, or a global outbreak of a new flu virus that is very different from the strains that typically circulate. This happened in 2009 with the swine flu pandemic, which is estimated to have killed between 151,000 and 575,000 people worldwide, according to the CDC. There is no flu pandemic happening currently.

On March 11, the World Health Organization (WHO) officially declared the outbreak of COVID-19 a pandemic. This is the first time WHO has declared a pandemic over a coronavirus.

Unlike seasonal flu, for which there is a vaccine to protect against infection, there is no vaccine for COVID-19. But researchers at the U.S. National Institutes of Health are in the early stages of developing one. Officials have already launched a phase 1 clinical trial of a potential vaccine for COVID-19.

In general, the CDC recommends the following to prevent the spread of respiratory viruses, which include both coronaviruses and flu viruses: Wash your hands often with soap and water for at least 20 seconds; avoid touching your eyes, nose and mouth with unwashed hands; avoid close contact with people who are sick; stay home when you are sick; and clean and disinfect frequently touched objects and surfaces.