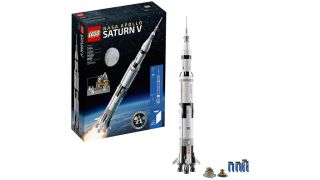 NASA's Apollo 11 moon landing celebrates its 50th anniversary this year, and Lego set the stage with this epic Saturn V moon rocket set, which is on sale now for 30% off via the Lego online store.

The Lego Ideas NASA Apollo Saturn V set is on sale for $95.99, down from its normal $119.99. The 1969-piece includes a towering Saturn V moon rocket that stands more than 39 inches (100 cm) tall and can be displayed upright or horizontal on an included stand.

I built the Lego Saturn V moon rocket with my daughter when it came out in 2017, and the set was nearly as tall her when we were finished. Its stages come apart to see the intricate engine details of each stage.

It also includes a lunar lander and command module in the payload fairing, a moon landing scene complete with miniature moonwalking astronauts and a splashdown capsule.

Lego's NASA's Apollo Saturn V moon rocket is not the only space-themed set on sale from the brick-building toy company. Earlier this year, Lego unveiled a full line of Mars exploration sets assembled (so to speak) with guidance from NASA scientists.

Many of those sets, which depict a space station, Mars bases and Mars shuttles, are on sale on both Amazon and Lego's online store. Here's a roundup of those best deals.

This 273-piece set lets you explore Mars from the comfort of your own home. It includes 2 Lego city Mars astronaut minifigures and pieces that build a space shuttle model, a Mars rover and a helidrone. View Deal

With this 202-piece set, you can build a rover ready to explore the Martian surface. Complete with a crew of 2 Lego city minifigure astronauts, this set comes with the pieces to build a rover with an opening cockpit, a grappling arm you can use to "take Martian samples," a solar power generator and other tools that your astronaut crew can use on Mars. View Deal

Lego doesn't just take you to Mars, with this Lego set you can also explore and set up camp on the moon! With this 412-piece set, you can build a lunar base and explore the moon with your friends. The set comes complete with 2 Lego city astronaut minifigures, 2 space station astronaut crew minifigures, a robot, a shuttle, a central airlock, a living module and much more. View Deal