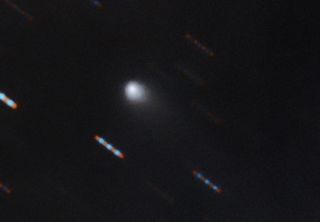 The first color image of the comet C/2019 Q4 (Borisov), which astronomers believe to be the first known interstellar comet ever identified, was captured by the Gemini North telescope at Hawaii's Mauna Kea. Gemini North acquired four 60-second exposures in two color bands (red and green). The blue and red lines are background stars moving in the background.
(Image: © Gemini Observatory/NSF/AURA/Travis Rector)

Observations of the interstellar Comet 2I/Borisov have been flooding in for six weeks, and the more astronomers duplicate one another's work, the more confident they are in their analysis of the object.

The prestigious journal Nature Astronomy has now published one of the earlier papers based on this frantic rush of observations. The new paper both confirms that Comet Borisov comes from outside our solar system and offers preliminary evidence suggesting that the object isn't very different from the comets that clutter our own solar system.

When an object as interesting as an interstellar comet comes around, astronomers are bound to swing into action to study it as much as possible, so the scientists behind the new paper are hardly the only ones reaching similar conclusions about the object.

Related: Interstellar Comet: Here's Why It's Got Scientists So Pumped Up

But the findings the scientists lay out in their new paper offers a helpful summary of what we know so far about this well-traveled visitor.

First, the scientists confirmed that Borisov is indeed interstellar, as originally flagged by a software program they have set up to constantly scan location observations of newly spotted objects. The program emails the researchers when something looks promising, and the scientists later verified the interstellar orbit independently.

The astronomers also took images of Comet Borisov on Sept. 10 and 13, using the William Herschel Telescope in La Palma, Spain, and the Gemini North Telescope in Hawaii. Those images gave the team an initial sense of what the interstellar comet is like.

As other scientists have also announced, for example, the team behind the new research also determined that the comet appears to look pretty similar to the comets that are born in our solar system, even though there was no reason to expect that to be the case.

The new paper includes a third piece of work, which estimates the size of the rocky core of the comet itself, below the swath of evaporating ice that gives all comets their fuzzy appearance. Of course, that's a tricky process, since all the fuzz interferes with observations.

If their previous conclusion proves accurate and Borisov isn't too different from comets within our solar system, Borisov's core should be about 1.2 miles (2 kilometers) across, the astronomers calculated. That would be on the smaller side of a previous estimate from another team of researchers, who calculated 0.9 to 4.1 miles (1.4 to 6.6 km).

Although the new research is one of the earliest Borisov papers to hit top-tier journals, it will be far from the last. Because of Borisov's trajectory through our solar system and the time it was identified, scientists have about a year left to observe the comet. That's a lot of paper fodder.

The new paper was published today (Oct. 14) in the journal Nature Astronomy.