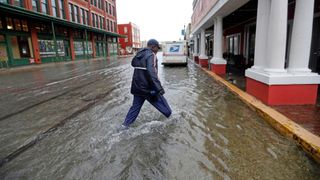 A postman walks through streets flooded by the tropical storm Imelda, as he delivers mail in Galveston, Texas.
(Image: © David J Phillip/AP/Shutterstock)

Record-breaking rainfall from the tropical storm Imelda is soaking southeastern Texas. Some areas have been swamped with 20 to 42 inches (51 to 107 centimeters) of rain over just three days, causing catastrophic flooding that is among the worst in U.S. history.

Imelda, the first named storm to strike this part of Texas since 2017's devastating Hurricane Harvey, is currently the fifth-wettest tropical storm to drench the contiguous U.S., The Weather Channel tweeted today (Sept. 19). Storms that drop this much rain are estimated to appear once in a millennium, according to precipitation models created by the National Oceanic and Atmospheric Administration (NOAA). But the last 1,000-year-rainfall to inundate Texas was Hurricane Harvey — which slammed the state just two years ago.

To put this quantify of rain into perspective, 41 inches (104 cm) over a two-month period would be considered exceptional in this part of Texas, said meteorologist Eric Holthaus in a tweet. Such an event would happen about once in a century "in a stable climate," Holthaus said. But recent and accelerating climate change is thought to foster conditions that make seasonal tropical storms wetter, windier and potentially more destructive, Live Science previously reported.

Photos and videos shared on social media show grim scenes of the historic flooding: highways completely submerged under choppy waves and search-and-rescue operations to save people trapped by the floods. In a video tweeted by Katherine Marchand, a reporter with ABC-13 Houston, a man floats down U.S. Highway 59 South, clinging to a pool noodle.

Other images shared on Twitter by Rachel Keller, an anchor with 12News Now, showed  cars abandoned on a flooded road, a newsroom with inches of water covering the floor and an alligator swimming near someone's porch, purportedly snapped from the porch of a home.

In 2017, Harvey left southeastern Texas reeling under flood levels that exceeded predictions for 500,000 years, Live Science previously reported. By the time Harvey was done, it had dropped more than 51 inches (130 cm) of rain in some parts of the state, making Harvey the wettest tropical storm to ever make landfall in the contiguous U.S. But Imelda has submerged some areas that were left untouched by Harvey, according to The Weather Channel. For now, the extent of the damage the storm will do remains to be seen.