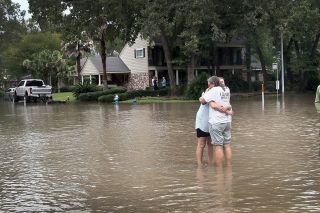 Hurricane Harvey may have dumped an unprecedented level of water, one expected to be seen just once every 500,000 years, in some areas of Southeast Texas, according to a new report.

The 24-hour measures of rain falling during Hurricane Harvey were unprecedented and exceeded the rate predicted to occur once every 1,000 years, researchers found. And the flood levels seen in some isolated areas of Houston over a five-day period exceeded those predicted to occur twice in a million years, a new analysis found. In some parts of texas, more than 51 inches (130 centimeters) fell over the five-day period, the report found.

To get to those eye-popping statistics, scientists combined rainfall modeling data with a century of precipitation statistics compiled in a 1998 U.S. Geological Survey (USGS) report. The odds of certain flooding are based in part on those statistics and in part on flood plain maps that account for things like elevation. The precipitation data from the USGS report, however, are spotty, according to a blog post about the report. For instance, the rainfall data was collected from precipitation stations across Texas, some of which may have only one or two data points, and many of which were operational going back only as far as the 1970s (though some were operational as far back as 1910). In addition, other areas of Texas may have had rainfall that was never detected, because no weather stations existed in that location at the time.  [In Photos: Hurricane Harvey Takes Aim at Texas]

This 1998 USGS paper found that Texas is particularly prone to flooding, often from excessive precipitation.

"Destructive flooding, caused by excessive precipitation, occurs somewhere in the state nearly every year. Conversely, short- and long-term droughts also occur throughout the state. At least one drought has occurred in some part of Texas in the majority of decades of the 20th century," the authors of the report wrote.

To get from those precipitation-station numbers to the extremely rare five-day flood incidence, MetStat, a meteorological consulting group, compared those maximum precipitation rates for different intervals with recorded rainfall detected by gauges across south Texas during Hurricane Harvey. While some areas received a 1-in-1,000-year flooding over a day, the total rainfall over the five-day period reached a staggering 1-in-500,000-year mark in some small pockets of Houston. The findings have not been submitted to a peer-reviewed journal.

Of course, 500,000 years ago, the city of Houston, the state of Texas and likely even Homo sapiens in the area did not exist. In the last half million years, the climate changed radically, as glaciers retreated and advanced across the continent of North America several times.  While Texas wasn't glaciated, those changes also dramatically altered the landscape and conditions in the region. So, a 500,000-year flood doesn't mean those areas have historically gotten such a flood just once in the last half million years — it could've happened more or less.