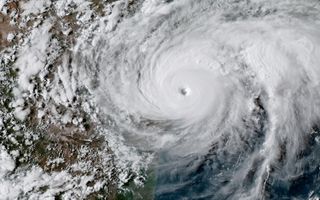 Captured by the GOES-16 satellite on Aug. 25, 2017, this image shows Hurricane Harvey as it reached its peak intensity — Category 4 — with maximum sustained winds of 130 mph.
(Image: © NESDIS)

Some of the biggest storms in recent years were fueled by climate change, which increased the amount of their drenching rainfall. Future storms could be even windier, wetter — and potentially more destructive — according to a new study.

Researchers evaluated 15 tropical cyclones (which are called hurricanes when they form in the Atlantic) from the past decade and then simulated how the storms would have performed during preindustrial times, prior to the advent of recent climate change. They also peered into possible future scenarios, modeling what the storms might look like if they took shape during the late 21st century, should Earth's climate continue to warm.

The scientists' findings, published online today (Nov. 14) in the journal Nature, paint a sobering picture of a future marked by supercharged hurricane seasons.

In simulations that required millions of hours of computing time, the researchers investigated the role that a warming climate could play in hurricane winds and rainfall, looking at factors such as greenhouse gas concentrations, humidity and temperature variations in the air and in ocean water. They found that hurricane rainfall increased under climate-change scenarios, with Hurricanes Katrina, Irma and Maria producing about 5 to 10 percent more rain than they might have generated under preindustrial conditions.

Wind speeds for storms in the recent past, on the other hand, would probably have been more or less the same at the time of preindustrial Earth, according to the study. However, future storms will likely become windier, with peak wind speeds rising by as much as 33 mph (53 km/h). Rainfall is also predicted to increase in hurricanes by about 25 to 30 percent, if present-day emissions continue unchecked, the scientists reported.

Warming oceans are already recognized as a fuel source for more intense hurricane seasons. And rapidly accumulating evidence shows how climate change is directly affecting individual storms. In September, climate change was identified as a contributor to Hurricane Florence, with scientists estimating that the storm produced 50 percent more rain than it would have in a preindustrial world.

"And our simulations strongly indicate that as time goes on we can expect to see even greater increases in rainfall," Patricola added.

More rainfall during seasonal hurricanes brings a greater risk of flooding to regions near coastlines. But the hazards of coastal living can also be intensified by another factor — human transformation of rural and suburban areas into more urban environments, according to another study, also published today in the journal Nature.

Researchers modeled simulations of Harvey's rainfall and flooding, measuring how Houston might have been affected if the city's urban development had stalled in the 1950s. They found that urbanization in Houston made the disastrous impacts of 2017's Hurricane Harvey even more damaging.

By comparing the simulations to Harvey's real impact in 2017, the scientists discovered that urbanization significantly increased how much rain fell during the storm and also increased the risk of flooding. New buildings in the city changed the airflow over Houston, leading to heavier precipitation; at the same time, more asphalt and concrete cover likely raised the risk of flooding.

Overall, the researchers found that urbanization in Houston increased the probability of extreme flooding from Harvey "by about 21 times." Climate modelers and urban planners alike therefore need to address and confront the threats faced by growing cities that are vulnerable to extreme precipitation, the study authors concluded.