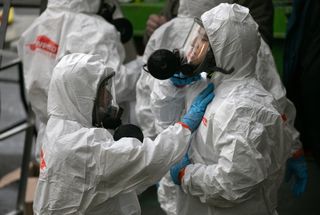 As schools, events, bars and restaurants shut down across many parts of the United States, frontline medical workers are bracing for the impact of the new coronavirus SARS-CoV-2.

The virus, which causes a disease called COVID-19, can be life-threatening for some individuals, especially those who are over the age of 60 and those with underlying health conditions such as high blood pressure and diabetes. In Italy, the percentage of patients with complications requiring care in intensive care units (ICUs) has ranged from 9% to 11%, researchers reported on Friday (March 13) in the journal The Lancet. This influx of cases has overwhelmed the medical system in northern Italy, and doctors have said a similar influx would do the same in the United States.

With testing capacity still limited in the U.S., frontline health care workers are preparing for an unprecedented situation. Guidelines are changing quickly at hospitals and clinics, and respirators, masks and other personal protective equipment are in short supply, health care workers from across the country contacted by Live Science said in interviews. The workers quoted here requested anonymity in order to speak candidly about their experiences.

Related: Coronavirus in the U.S.: Map, case counts and news

"The lead-up has been chaotic," said an emergency department physician in Montana.

Emergency rooms and urgent cares are already seeing an uptick in patients who have respiratory symptoms and are hoping to be tested for COVID-19. But tests remain limited and turnaround times slow, said the emergency department physician from Montana.

"The pathways of testing have been extremely unclear and changing frequently with regard to who qualifies and who we are able to test," he said. In one case last week, he saw a patient who the doctor felt needed to be tested, but that person did not qualify according to the hospital's guidelines and was sent home. Less than 12 hours later, the physician said, those guidelines changed, and the patient would have been eligible for a test. The hospital then alerted the state health department to the patient, and the patient ultimately tested negative.

Shortages of personal protective equipment, hospital beds and space are the key concerns in the emergency department, the physician said. Doctors and nurses are being asked to reuse N95 masks, which protect against viral transmission, the doctor said. Health care workers are working to find ways to separate patients who come in with respiratory symptoms from patients who come to the emergency department for other reasons.

"The emergency department is going to still need to take care of everyone else who comes in with a non-coronavirus issue," the Montana doctor said. His hospital, he added, is already extraordinarily packed with regular cases of influenza, sepsis and other illnesses.

"If this does become a much bigger problem, we're going to have a physical space problem of having to keep patients in isolation," he said. "I don't know how we're going to tackle that."

Space is a main concern in Austin, Texas, as well, said an urgent care nurse who works in an emergency room in one of that city's major hospital systems. People are likely to come to urgent care out of fear, she said, and many patients in the waiting room are at high risk of complications from COVID-19 due to preexisting immune problems or other conditions.

The urgent care staff have been preparing since before patients started arriving seeking testing, the Austin nurse said. Changing protocols have been an issue, she said; one person at the hospital was assigned the role of keeping track of the changing guidelines from the Centers for Disease Control and Prevention (CDC).

At the Austin hospital, the team is also making adjustments on the ground, the nurse said. For example, the staff found that putting on and taking off personal protective equipment according to the initial clinic guidelines was impractical and unsafe, because it took away too many staff from other urgent matters. This led to some alterations in the initial protocols so as to use the equipment more safely, she said.

"We can't lose our cool," she said. "That's not an emergency room nurse's way. We are just trying to weed out issues and make the most effective plan we can."

Physicians and health care workers in non-emergency specialties are concerned about potential equipment shortages, worrying that those shortages will affect their patients. Under usual circumstances, many patients already need ventilators or oxygen, said a pediatrician in Montana who works with children who have medically complex conditions. For example, many of her patients live at home but use ventilators to breathe.

"I'm worried that our pediatric patients will be edged out of care," she said. If companies that supply ventilator parts and equipment are slammed with COVID-19-related orders, they may struggle to provide for their regular patients.

Adult patients with complex-care situations may also struggle if hospital beds are in short supply, said a nurse in Springfield, Missouri, who works with high-risk populations in an outpatient clinic.

"Springfield has about 1,500 general hospital beds, and just over 200 of those are ICU," she said. "Besides smaller regional hospitals that have anywhere between 10 to 50 beds, we are pretty much it between Tulsa, [Oklahoma], and St. Louis."

Rural hospital closures in the past few years mean that Springfield draws patients from a broad geographical area, she said. "There is just going to be a lot of competition for bed space if the case curve accelerates as quickly, as it's looking like it might," she said.

Guidelines are changing rapidly, said the Montana pediatrician. She is affiliated with four separate medical institutions, and each has been sending between one and five emails a day with preparedness information, she said.

"Each institution is showing different levels of preparedness and different organizational plans," she said.

Early confusion in the Washington, D.C., area has smoothed out somewhat in recent days, said a primary care physician practicing in that region.

The goal in primary care has been to alleviate the pressure on the emergency room by triaging and testing patients who are only mildly ill, the doctor said. His clinic is now sending tests to a private lab and has been able to test everyone who clinic staff feels needs a test. So far, all of the few dozen tests the clinic has done have turned out negative.

"The upside of that is every person, while they have to be in isolation waiting for the results, they didn't go to the ER," he said.

The clinic is currently well stocked with personal protective equipment but is taking steps to reduce waste, the physician said. For example, testing is set up so that medical professionals have to enter the patient's room only once.

For many health care workers, the greatest worry right now is not inadvertently transmitting the virus to vulnerable patients. Home-health caregivers are being advised to take extra hygiene precautions and to stay home at the first signs of illness, said a home-care administrator in the Washington, D.C., area. Many nonessential care visits have been canceled. Assisted living communities and nursing homes where caregivers often work are either banning or severely restricting visitors, she said. While some employees of the home-care organization have access to a nursing team to guide their decisions, many contract workers are responsible for monitoring their own health and risk levels.

The nurse in Springfield who works with at-risk patients said that her clinic is in a building that shares space with other outpatient clinics, labs and pharmacies.

"We are working with clinic administration to find ways to protect our patients from exposure, but it's kind of inevitable just getting in the building," she said.

Telemedicine is one option for at least some visits, said a pediatric specialist at a hospital in Birmingham, Alabama. But launching a telemedicine program requires a great deal of paperwork and coordination with insurance companies, she said, and it's not clear how quickly that can happen.

So far, guidance in Birmingham has been fuzzy about whether doctors should cancel elective procedures at the hospital and about when nonclinical employees should work from home, the specialist said.

Actions vary from hospital to hospital. A nursing student and nursing assistant at a hospital in rural, northern Michigan told Live Science that the hospital removed half of the seating from the hospital cafeteria over the weekend and drastically reduced visitation. Some elective procedures have been canceled there; in other cases, doctors are scrambling to fit in those procedures before they are shut down.

Whether hourly workers, like the nursing assistant, will be paid if they can't come to work because of illness or childcare pressures is not clear. Many health care workers contacted by Live Science reported struggling with how to isolate themselves from vulnerable family members during a time when they expect to be exposed to the new virus.

Doctors and nurses are pulling together to face the threat from the virus; multiple health care workers interviewed by Live Science mentioned feeling buoyed by the teamwork and dedication they saw around them. There is a large private Facebook group for physicians responding to COVID-19 where professionals share resources and advise one another on protocols and guidelines. Doctors from Seattle, where the impact is being felt intensely, have been sharing experiences and guidance with colleagues across the country.

But ultimately, these professionals' ability to stay on top of the epidemic will depend on whether everyone else listens to public health officials and stays home as much as possible.

"We're a relatively small facility, and we serve a huge geographical area," said the nursing student in northern Michigan. "If things get bad up here, they will get bad really, really fast. We have limited ICU beds, limited ventilators, limited perfusionists [doctors who operate heart-lung bypass machines], limited bypass and ECMO [extracorporeal membrane oxygenation] equipment. … If half our service area gets sick, we're going to be buried in here."

That's true in urban areas, too.

"We know that it's the community that needs to stop the spread," said the primary care physician in the D.C. area. "I think it's important to understand that, at this point, there is really no such thing as an overreaction."