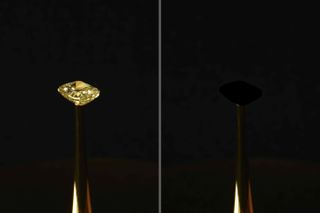 A new exhibition in New York turns a sparkling yellow diamond (left) into a veritable black hole (right) thanks to the blackest material ever created.
(Image: © R. Capanna, A. Berlato, and A. Pinato)

On the floor of the New York Stock Exchange, a team of artists and scientists have made a 16.78-carat diamond — valued at more than $2 million — disappear.

Granted, denizens of the Stock Exchange are no strangers to making vast amounts of wealth vanish, but this time the scientists are doing the heavy lifting. Working with artist Diemut Strebe, a team of researchers from MIT covered the shimmering yellow diamond in a newly discovered type of carbon nanotube coating that turns 3D objects into black, almost 100% light-free voids.

According to the researchers, who described the coating in a study published Sept. 12 in the journal ACS Applied Materials & Interfaces, this newfound nanotube structure is the blackest of black materials ever created, absorbing more than 99.996% of any light that touches it.

"Our material is 10 times blacker than anything that's ever been reported," lead study author Brian Wardle, a professor of aeronautics and astronautics at MIT, said in a statement.

The team created the new coating accidentally, while trying to design an improved process for growing carbon nanotubes (essentially, microscopically small strings of carbon) on surfaces like aluminum foil. One problem with working with aluminum, they found, is that a layer of oxides formed whenever the surface was exposed to open air, creating a pesky chemical barrier between the nanotubes and the foil. To eliminate these oxides, the team soaked the foil in saltwater, then moved it into a small oven where the nanotubes could grow without oxygen interference.

With millions of tangled nanotubes now studding the foil like a microscopic forest of fur, incoming photons of light got lost and had a very hard time exiting from the foil's surface. The foil, the team found, had thus turned completely black — so black, the ridges of the aluminum were completely invisible when viewed straight on.

"I remember noticing how black it was before growing carbon nanotubes on it, and then after growth, it looked even darker," study co-author Kehang Cui, a professor at Shanghai Jiao Tong University, said in the statement. "So, I thought I should measure the optical reflectance of the sample."

Cui and colleagues compared the reflectiveness of their new coating with other light-devouring nanostructures, including the previous record holder for darkness, Vantablack. While the differences between the various nanostructures are negligible to human eyes, the researchers found that their coating was indeed blacker than every other black they tested, no matter the angle at which light hit the coating.

The effect, as you can see in the image of the diamond above, is eerie. Once exposed to the coating, the brilliant yellow diamond seemingly loses all of its facets, flattening into what artist Diemut Strebe called "a kind of black hole" from which no light or shadows can escape.

Incidentally, this uberdark coating could one day be used to help astronomers see actual black holes, by applying the material to telescope-mounted shades that help reduce glare from the stars. For now, though, you can see the diamond-shaped void for yourself at the New York Stock Exchange until Nov. 25.