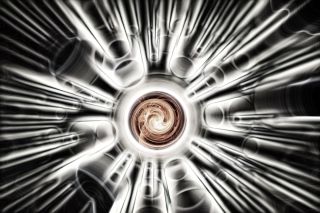 In case you didn't realize it, photons are tiny little bits of light. In fact, they're the smallest bit of light possible. When you turn on a lamp, gigantic numbers of photons spring from that bulb and slam into your eyes, where they are absorbed by your retina and turned into an electrical signal so that you can see what you are doing.

So, you can imagine just how many photons surround you at any one time. Not just from the lights in your room, but photons also stream in through the window from the sun. Even your own body generates photons, but all the way down in infrared energies, so you need night vision goggles to see them. But they're still there.

And, of course, all the radio waves and ultraviolet rays and all the other rays constantly bombard you and everything else with an endless stream of photons.

These little packets of light aren't supposed to interact with each other, essentially having no "awareness" that the others even exist. The laws of physics are such that one photon just passes by another with zero interaction. [The 18 Biggest Unsolved Mysteries in Physics]

That's what physicists thought, at least. But in a new experiment inside the world's most powerful atom smasher, researchers got a glimpse of the impossible: photons bumping into each other. The catch? These photons were a little off their game, meaning they weren't acting like themselves and instead had temporarily become "virtual." By studying these super-rare interactions, physicists hope to reveal some of the fundamental properties of light and possibly even discover new high-energy physics, like grand unified theories and (maybe) supersymmetry.

Usually, it's a good thing that photons don't interact with each other or bounce off each other, because that would be a total madhouse with photons never going anywhere in any sort of straight line. So, thankfully, two photons will simply slip by each other as if the other didn't even exist.

That is, most of the time.

In high-energy experiments, we can (with a lot of elbow grease) get two photons to strike each other, though this happens very rarely. Physicists are interested in this sort of process because it reveals some very deep properties of the nature of light itself and could help to uncover some unexpected physics. [18 Times Quantum Particles Blew Our Minds]

Photons so rarely interact with one another because they connect only with particles that have electric charges. It's just one of those rules of the universe that we have to live by. But if this is the rule of the universe, then how could we ever get two photons, which have no charge, to connect with each other?

When a photon isn't

The answer lies in one of the most inscrutable and yet delicious aspects of modern physics, and it goes by the funky name of quantum electrodynamics.

In this picture of the subatomic world, the photon isn't necessarily a photon. Well, at least, it's not always a photon. Particles like electrons and photons and all the other -ons continually flip back and forth, changing identities as they travel. It seems confusing at first: How could, say, a beam of light be anything other than a beam of light?

In order to understand this wacky behavior, we need to expand our consciousness a little (to borrow an expression).

In the case of photons, as they travel, every once in a while (and keep in mind that this is extremely, extremely rare), one can change its mind. And instead of being just a photon, it can become a pair of particles, a negatively charged electron and a positively charged positron (the antimatter partner of the electron), that travel together.

Blink and you'll miss it, because the positron and electron will find each other, and, as happens when matter and antimatter meet, they annihilate, poof. The odd pair will turn back into a photon.

For various reasons that are way too complicated to get into right now, when this happens, these pairs are called virtual particles. Suffice it to say that in almost all cases you never get to interact with the virtual particles (in this case, the positron and electron), and you only ever get to talk to the photon.

But not in every case.

A light in the dark

In a series of experiments run by the ATLAS collaboration at the Large Hadron Collider beneath the French-Swiss border and recently submitted to the online preprint journal arXiv, the team spent way too much time slamming lead nuclei into each other at nearly the speed of light. However, they didn't actually let the lead particles hit each other; instead, the bits just came very, very, very, very close. [Photos: The World's Largest Atom Smasher (LHC)]

This way, instead of having to deal with a gigantic mess of a collision, including a lot of extra particles, forces and energies, the lead atoms just interacted via the electromagnetic force. In other words, they just exchanged a whole lot of photons.

And every once in a while — extremely, incredibly rarely — one of those photons would briefly turn into a pair composed of a positron and an electron; then, another photon would see one of those positrons or electrons and talk to it. An interaction would occur.

Now, in this interaction, the photon just sort of bumps into either the electron or the positron and goes off on its merry way without any harm. Eventually, that positron or electron finds its mate and returns to being a photon, so the result of two photons hitting each other is just two photons bouncing off each other. But that they were able to talk to each other at all is remarkable.

How remarkable? Well, after trillions upon trillions of collisions, the team detected a grand total of 59 potential intersections. Just 59.

But what do those 59 interactions tell us about the universe? For one, they validate this picture that a photon isn't always a photon.

And by digging into the very quantum nature of these particles, we could learn some new physics. For example, in some fancy models that push the boundaries of known particle physics, these photon interactions occur at slightly different rates, potentially giving us a way of exploring and testing these models. Right now, we don't have enough data to tell the differences among any of these models. But now that the technique is established, we might just make some headway.

And you're going to have to excuse the very obvious closing pun here, but hopefully soon, we can shed some light on the situation.

Paul M. Sutter is an astrophysicist at The Ohio State University, host of "Ask a Spaceman" and "Space Radio," and author of "Your Place in the Universe."