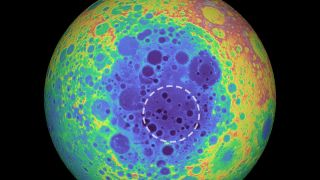 When scientists discover a round, lumpy object that they can't totally explain, they have a special name for it: A blob.

Blobs come in all shapes and sizes. Some are as small as cells, others as big as galaxies. Some blobs live underwater, others deep in space or far below Earth's crust. Every blob is a good blob, but some blobs are great blobs. As 2019 draws to a close, wobble along with us as we recall the nine best blobs of the year. (Arranged from smallest to largest.)

Fun fact: All life begins in blob form. You did, your mother did and this adorable baby salamander did. While your own personal blobbiness is probably only recorded in a blurry ultrasound photo, certain amphibians lay transparent eggs, making their earliest stages of development visible to anyone with a microscope. In February 2019, photographer Jan van IJken shared this incredible time-lapse video of one such amphibian (an alpine newt) transforming from a single cell into a living, breathing tadpole.

The whole video is stunning, but the highlight may come at about the three-minute mark. That's when, after dividing from one cell into millions, the amphibious blob finally folds in on itself and begins to take on a familiar fetal shape. By the end of the video, a baby salamander hatches and swims away. Godspeed, young blob!

Jellyfish may be the most famous blobs in nature, and for good reason — with more than 2,000 species around the world, these unmistakably amorphous animals are easy to find near pretty much any coast on Earth.

This year, one jellyfish encounter earned top blob marks for us. In July, a pair of divers in England came face-to-faceless-head with a hulking barrel jellyfish (Rhizostoma pulmo) — a rarely seen species that can grow about as large as a full-grown human. (Luckily, they caught the encounter on video).

That wasn't the only human-size blob divers bumped into this year. There was also the gelatinous sac researchers found while investigating a sunken ship near Norway. That sac, as large as the divers themselves, was transparent and encased a strange yellow object. Upon inspection with a flashlight, the divers saw that the object appeared to be a clump of squid ink, and it was surrounded by hundreds of thousands of itty-bitty squid eggs.

The team determined that the sac belonged to a species of 10-armed cephalopod called the southern shortfin squid (Illex coindetii), which can lay about 200,000 eggs at a time in sacs like this one. In case the phrase "squiddy eggy blob" doesn't quite do it for you, the researchers also gave the sac a special name: "blekksprutgeleball," meaning "squid gel ball" in Norwegian.

In this year's blob news most likely to get you in trouble with HR, thousands of wiggly, 10-inch-long "penis fish" washed up on a California beach in early December.

In reality, these sausage-shaped castaways are not fish (or penises) at all, but a species of North American marine worm known as the "fat innkeeper worm." Their name comes from their penchant for building U-shaped burrows in the sand, which other tiny beach creatures like to sneak into in order to steal whatever food the innkeeper worm happens to throw away. How did thousands of these unfortunately-named, unfortunately-shaped blobs end up strewn across the beach? A storm likely tore up all their burrows and left the worms destitute. Keep that in mind the next time you have a bad day: At least you are not a homeless penis fish.

About halfway between your feet and the center of Earth, two continent-size mountains of hot, compressed rock pierce the gut of the planet. Technically, these mysterious hunks of rock are called "large low-shear-velocity provinces" (LLSVPs), because seismic waves always slow down when passing through them. But most scientists call them simply "the blobs."

In March, Eos (the official news site of the American Geophysical Union) shared an awesome 3D animation showing the most-detailed view of the blobs ever. The blobs begin thousands of miles below Earth's surface, where the planet's rocky lower mantle meets the molten outer core. One blob lurks deep below the Pacific Ocean, the other beneath Africa and parts of the Atlantic. Both of them stand about 100 times taller than Mount Everest and are as large as continents. Despite their massive scale, scientists don't really have any idea what the blobs are or why they're there. Could they impact volcanic activity? Maybe. They're too deep to study directly so, for now, these blobs must remain shrouded in mystery.

Not to be totally outshined by its neighbor, the moon also revealed a mysterious subterranean blob this year, too.

In April, NASA scientists discovered what they're calling an "anomaly" of heavy metal hidden deep below the moon's South Pole-Aitken basin (the largest preserved impact crater anywhere in the solar system). A gravitational analysis suggests the metal blob lives hundreds of miles below the moon's surface, weighs about 2.4 quadrillion U.S. tons (2.18 quintillion kilograms) and is about five times larger than the Big Island of Hawaii. The anomaly appears to be weighing down the South Pole-Aitken crater by more than half a mile, and may be altering the moon's gravitational field.

The sun's corona constantly breathes wispy strings of hot solar wind into space — but, once in a while, those breaths become full-blown burps. According to a study in the February issue of the journal JGR: Space Physics, every few hours the plasma underlying solar wind grows significantly hotter, becomes noticeably denser, and pops out of the sun in rapid-fire orbs capable of engulfing entire planets for minutes or hours at a time. Officially, these solar burps are called periodic density structures, but astronomers have nicknamed them "the blobs," due to their lava-lamp-blob-like appearance.

These blobs are hundreds of times larger than Earth and can potentially pack twice as many charged particles as the average solar wind. Astronomers think they're related to solar storms (explosions of magnetic field activity on the sun's surface), but their true origin and function remains as unclear as the water in your lava lamp.

In 1987, a star in the Milky Way's nearest satellite galaxy erupted in a supernova explosion, leaving a cloud of colorful cosmic debris in its place. Behind that debris should be a neutron star (an ultradense stellar corpse) but astronomers have been unable to find one for the last 32 years. Now, in a study published in November, researchers think they've found that missing neutron star hiding in a "blob" of brighter-than-average radiation at the cloud's core. If verified, this discovery will not only solve a decades-old mystery, but will also confirm that the only thing better than a blob is a blob with a prize inside.

In a galaxy of blobs, two bubbles reign supreme: The Fermi Bubbles.

The Fermi Bubbles are twin blobs of high-energy gas ballooning out of both poles of the Milky Way's center, stretching into space for 25,000 light-years apiece (roughly the same as the distance between Earth and the center of the Milky Way). The bubbles are thought to be a few million years old, and likely have something to do with a  giant explosion from our galaxy's central black hole — but observations are scarce, as they are typically only visible to ultra-powerful gamma-ray and X-ray telescopes. This September, however, astronomers writing in the journal Nature detected the bubbles in radio waves for the first time, revealing large quantities of energetic gas moving through the bubbles, possibly fueling them to grow even larger.

Will the Milky Way's biggest blobs get even bigger? Stay tuned in 2020 to find out.