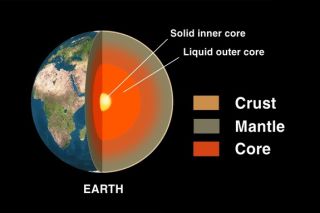 Earth has multiple layers: the crust, the mantle, the liquid outer core and the solid inner core.
(Image: © NASA.)

The Earth's magnetic field controls the direction and speed at which Earth's inner and outer cores spin, even though they move in opposite directions, new research suggests.

Scientists have long suspected that Earth's magnetic field — which protects life from harmful space radiation — drifts in a slightly westerly direction. That theory was established in the 1690s, when geophysicist Edmund Halley (the same Halley who spotted the eponymous comet) sailed aboard a research vessel through the South Atlantic Ocean and collected enough compass readings to identify this shift.

By the mid-20th century, geologists had gathered further evidence for this drift and had determined that the westerly rotation of the magnetic field exerts a force on the liquid outer core— composed of a molten mix of iron and nickel — that causes it to rotate in a westerly direction. Decades later, geophysicists used deep seismic data to determine that the inner core — a solid iron-nickel alloy that is about the size of the moon — rotates in an easterly direction, at a greater speed than the rotation of the Earth itself.

But, until now, scientists have regarded these rotations within the two layers of the core as separate, with no relation to each other.

Now, researchers at the University of Leeds in England have found a common link between the two rotations by creating a computer model that shows how the rotation of the Earth's magnetic field can both pull the liquid outer core in a westerly direction while also exerting an opposite force on the inner core that causes an easterly rotation.

"Previously, there have been these two independent observations, and there has not been a link between them," study co-author Philip Livermore, of the University of Leeds, told LiveScience's OurAmazingPlanet. "We argue that the magnetic field itself is pushing on the outer core, and there is an equal and opposite push on the inner core."

The Earth's magnetic field — created by the convection of hot liquid metal within the outer core — undergoes slight fluctuations roughly every decade. The inner core's rotation rate has also been shown to fluctuate on a similar timescale. These new results help explain why these two phenomena occur on the same timescale, since one has now been shown to affect the other, the researchers say.

The findings were detailed in the Sept. 16 issue of the journal Proceedings of the National Academy of Sciences.