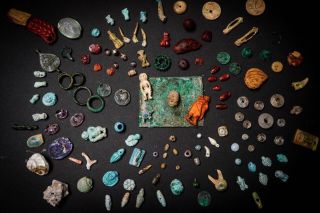 A stash of ancient amulets is seeing the light of day, now that archaeologists in Pompeii have unearthed the treasures from under a pile of ash dating to the eruption of Mount Vesuvius in A.D. 79.

The amulets are tiny and detailed. One is a petite glass engraving of Dionysus, the Greek god of wine, fertility and religious ecstasy. Another shows an engraving of a dancing satyr. Other carvings depict skulls, phalluses, scarabs and Harpocrates, the deity of silence and secrets, according to the Archaeological Park of Pompeii, the group that made the finding.

These amulets were likely collected and used by a woman, either as a type of jewelry or to protect her from bad luck. Archaeologists are now studying their likely symbolism to "understand their meaning and function," Massimo Osanna, the general director at the Archaeological Park of Pompeii, said in a statement.

"They are objects of everyday life in the female world and are extraordinary because they tell micro-stories, biographies of the inhabitants of the city who tried to escape the eruption," Osanna said.

The amulets were found in the remains of a wooden box in one of the rooms of the "House of the Garden," a site of ongoing excavation at Pompeii. It's unclear if the female owner of the amulets escaped the horrific eruption, although the majority of residents did, as evidence shows many people resettled in nearby cities. If she did manage to flee to safety, however, the woman apparently didn't have time to grab her good-luck charms, Osanna noted.

The wooden box itself had decomposed in the nearly 2,000 years since the eruption, but the volcanic material that had surrounded it maintained its rectangular shape. Archaeologists found the box's bronze hinges, as well as the well-preserved amulets within.

Included in the ancient woman's boxed collection were two mirrors, pieces of a necklace, glazed ceramic ornaments and amulets made from bronze, bone, amber and glass. In addition, the archaeologists found phallic-shaped amulets, a human figure and a handful of gems, including a purple amethyst with a female figure and a red carnelian with a craftsman figure, the Archaeological Park of Pompeii reported.

The amber and glass carvings are so well done, that whoever purchased them likely had a pretty penny to spare. But if the collector bought them for protection, it's possible these amulets didn't do their intended job.

"In the same house, we discovered a room with 10 victims, including women and children, and now we are trying to establish kinship relationships, thanks to DNA analysis," Osanna said. "Perhaps the precious box belonged to one of these victims. Interesting is the iconography of objects and amulets, which invoke fortune, fertility and protection against bad luck."

The amulets will soon go on display, along with other recent Pompeii finds, at the Palestra Grande, in an exhibition that will be a follow-up of "Vanity," an exhibition dedicated to jewels from the Cyclades and Pompeii and other nearby sites.

Although Mount Vesuvius erupted long ago, archaeologists continue to excavate the ruins at Pompeii. Other recent discoveries there include a thermopolium (a fast-food joint) with a sexy logo and an ancient fresco of the mythical Narcissus.