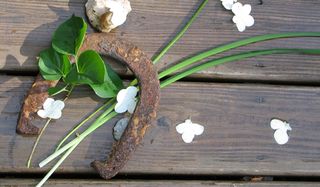 A Saint Patrick's Day staple, horse shoes have long been associated with good luck although there's an ongoing debate over the proper way to use them when attempting to attract good fortune.

From the horseshoe necklace Carrie Bradshaw wore in the "Sex and the City" movie to the horseshoe-shape purple marshmallows in Lucky Charms cereal, the superstitious symbols have a solid presence in popular culture. Their popularity as lucky emblems dates back for centuries, when they were used to ward off evil goblins.

According to ancient folklore, small-framed "fairy folk" existed during the Stone Age across what is now Northern Europe and the British Isles. When migrating Celtic tribes began invading the lands around 400 BC, the fairies hid in forests and camouflaged themselves by wearing green much like today's leprechauns. The new settlers told stories about the mysterious, magical "little people" living in the woods, who were also referred to as elves and goblins .

The goblins were accused of causing many misfortunes among the settlers, from casting spells to prevent cows from giving milk and chickens from laying eggs to causing infertility in couples . Legends also told of babies kidnapped by the fairies. It was believed that the primitive goblins feared the metal weapons of their enemies, and were therefore afraid of iron .

To ward off goblins and evil spirits from their homes, the people hung iron horseshoes over their front doors. "Horseshoes were doubly frightening to the little people because they looked like the Celtic moon god's crescent," Donald E. Dossey states in his book, "Holiday Folklore, Phobias, and Fun."

Although the lucky emblem's status has survived over the centuries, there's still some debate over the proper way to position a horseshoe in order to repel bad fortune: Some believe that a horseshoe with the two ends pointing up collects good luck and keeps it from falling out, while other traditions state that the two ends should point downward so that luck pours onto those who walk through the door.