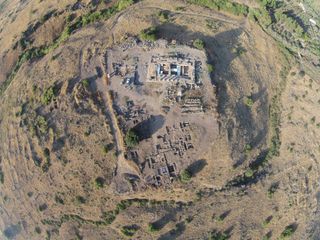 The 1,900-year-old house containing scenes of nature is part of a much larger archaeological site called Omrit.
(Image: © Courtesy of Dan Schowalter)

A house dating back around 1,900 years, which is decorated with frescoes showing scenes of nature, has been discovered at the archaeological site of Omrit in northern Israel. Phallic amulets were also found at the site.

The house was constructed during the late first or early second century A.D., and was likely two stories tall, said Daniel Schowalter, a professor at Carthage College in Wisconsin.

"The floor [of the house] was plastered and its walls were covered in frescoes," Schowalter told an audience in Toronto at the joint annual meeting of the Archaeological Institute of America and the Society for Classical Studies in January.

It's not certain who owned the house in ancient times. "One would guess that it might have been commissioned by a Roman official who was stationed in the area, but it could also be the home [of] a local elite who adopted some traditional Roman motifs in decoration," Schowalter told Live Science in an email.

Only part of the house has been excavated so far. The excavated area "was probably a courtyard, since the doorway we have opens into the 'house' proper. In other words, you could be locked out in that area," Schowalter said.

The house appears to have been demolished during the early third century, as archaeologists found a layer of fill on top of the remains of the house. On top of that layer, a new building that resembles a "stoa" (a covered walkway or portico) was constructed, Schowalter said.

Several phallus-shaped amulets were found in the layer of fill that covered the demolished house, Schowalter said. "That fill was probably put down in the early third century. So the amulets date to before that time, but since it is fill, we aren't sure how long before."

Amulets in the shape of peniseshave been found in many parts of the Roman Empire and may have been worn to help prevent misfortune.