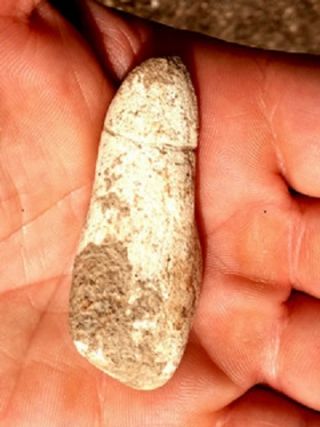 This phallic figurine was unearthed during excavations in northern Israel.
(Image: © Ya'akov Vardi, courtesy of the Israel Antiquities Authority)

Some remarkable traces of Stone Age life were unearthed recently in northern Israel, including a pit of burned bean seeds and a carving of a penis that's more than 6,000 years old, the Israeli Antiquities Authority (IAA) reported.

"For the first time in the country, entire buildings and extensive habitation levels were exposed from these early periods, in which the rich material culture of the local residents was discovered," IAA excavation directors, Yitzhak Paz and Ya'akov Vardi, said in a statement this month.

"We found a large number of flint and obsidian arrowheads, polished miniature stone axes, blades and other flint and stone tools," the archaeologists added. "The large amount of tools made of obsidian, a material that is not indigenous to Israel, is indicative of the trade relations that already existed with Turkey, Georgia and other regions during this period."

The team said they also found thousands of charred broad bean seeds inside of a pit —  providing an early example of legume cultivation in the Middle East — and the remains of early Chalcolithic rectangular buildings, replete with pottery, as well as flint and stone tools. Other artifacts were slightly more enigmatic, such as the phallic figurine and a palette bearing a schematic etching of female genitals. The IAA called these objects "cultic sexual symbols" that might have represented the fertility of the earth. [Religious Worship: The 10 Craziest Cults]

Israel's rich ancient history means that artifacts are often uncovered when the ground is broken for construction projects. Animal and human figurines, some more than 9,000 years old, have been found at Tel Motza, an archaeological site being excavated ahead of the expansion of Highway 1, the main road connecting Jerusalem and Tel Aviv.