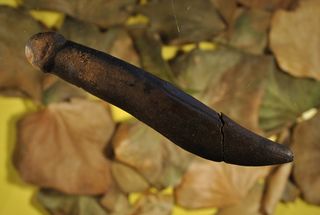 A phallic carving out of antler bone dating from the Stone Age, discovered recently in Sweden.
(Image: © Peter Zetterlund, Swedish National Heritage Board)

Sex toys have come a long way since the Stone Age – but then again, perhaps not as much as we might think.

Last week, an excavation in Sweden turned up an object that bears the unmistakable look of a penis carved out of antler bone. Though scientists can't be sure exactly what this tool was used for, it's hard not to leap to conclusions. [See "Sex Myths and Taboos"]

"Your mind and my mind wanders away to make this interpretation about what it looks like – for you and me, it signals this erected-penis-like shape," said archaeologist Göran Gruber of the National Heritage Board in Sweden, who worked on the excavation. "But if that's the way the Stone Age people thought about it, I can't say."

The resemblance is uncanny.

"Without doubt anyone alive at the time of its making would have seen the penile similarities just as easily as we do today," wrote Swedish archaeologist Martin Rundkvist on his blog, Aardvarchaeology.

The discovery is so recent, Gruber said, there hasn't been enough time to submit the finding for publication in a scientific journal, though the researchers plan to.

The carved bone was unearthed at a Mesolithic site in Motala, Sweden, that is rich with ancient artifacts from between 4,000 to 6,000 B.C. The area's unique features may have allowed bone artifacts, which usually get destroyed over the millennia, to survive.

"It's an organic object, that's why it's special," Gruber told LiveScience. "Normally when we excavate early Mesolithic sites we never get the organic material. But this site where we're excavating now is along the shoreline. The preservation is very good here – it's been lying in the bottom sediments and clay layers of the river, and it's been well preserved there."

It's not the first time that such a phallic object has been found from the ancient world. Another item strongly resembling a penis was unearthed in Germany in 2005. That one is even older – dating from 28,000 years ago – and made of stone.

Yet the recent discovery was enough to shock the scientists working at the dig, which is led by National Heritage Board archaeologist Fredrik Molin.

"Nobody here, and nobody that we heard of or talked with, had ever seen something like this in northern European or Scandinavian sites," Gruber said.

Perhaps instead of, or in addition to, its sexual purpose, the object may have been used as a tool, such as to chip flakes of flint, Gruber suggested. One end is shaped into more of a point, he said.

It's not immediately clear whether the tool would have been one most likely to be used by men or women or both.

"If it's a tool and it's also shaped like a penis, it could be an item where you want to discuss gender questions," Gruber said.

Sexual symbolism isn't uncommon on ancient artifacts, though more often female symbols, such as those representing a fertile mother Earth, are seen.

"I think this perhaps points in another direction, so to say," Gruber said.