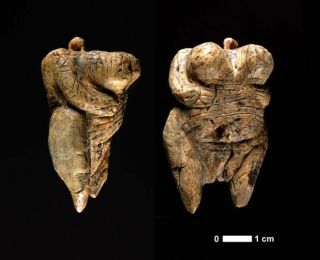 Side and front views of the Venus of Hohle Fels.
(Image: © H. Jensen; Copyright University of Tubingen)

If human culture seems obsessed with sex lately, it's nothing new. Archaeologists have discovered the oldest known artistic representation of a woman — a carved ivory statue of a naked female, dating from 35,000 years ago.

The figurine, unearthed in September 2008 in Hohle Fels Cave in southwestern Germany, may be the oldest known example of figurative art, meaning art that is supposed to represent and resemble a real person, animal or object. The discovery could help scientists understand the origins of art and the advent of symbolic thinking, including complicated language.

"If there's one conclusion you want to draw from this, it's that an obsession with sex goes back at least 35,000 years," University of Cambridge anthropologist Paul Mellars told LiveScience. He was not involved in the new finding. "But if humans hadn’t been largely obsessed with sex they wouldn’t have survived for the first 2 million years. None of this is at all surprising."

The fixation wasn't just for naked women, though. Early carvings of phalluses appeared in Europe at about the same time.

The tiny statue is carved out of the tusk of a woolly mammoth and is less than 2.5 inches (60 millimeters) long. Instead of a head, it has a ring that scientists think meant it was worn as a pendant looped through string. Paleoanthropologist Nicholas Conard of Germany's Tubingen University reported the discovery in the May 14 issue of the journal Nature.

The oldest human art dates back much further, to between 75,000 and 95,000 years ago in Africa. But that art was abstract, and consisted of geometrical designs engraved on pieces of red iron oxide. This is the first known art to represent a woman, and possibly the first art to represent anything real at all. Another find, a simple drawing that may represent a half-man, half-animal, could be a few thousand years older, but the date on that is uncertain.

The jump from abstract art to representative art seems significant, and might reflect a leap in the cognitive capacity of the human brain around this time. Some experts think that the development might have gone along with a leap in the complexity of human language.

"Language is a symbolic system — words are symbols for things. And so is art," Mellars said. "Art is a glaring illustration of a capacity for symbolic thinking. Since symbolic thinking lies at the core of language, people have often tried to link the two."

Mellars pointed out that there isn't enough evidence to really understand how complex human language was at this point, though.

Sex on the brain

The statue is notable not just for its symbolism, but for its style — particularly its sexuality.

"The figure is explicitly — and blatantly — that of a woman, with an exaggeration of sexual characteristics (large, projecting breasts, a greatly enlarged and explicit vulva, and bloated belly and thighs) that by twenty-first-century standards could be seen as bordering on the pornographic," Mellars wrote in a commentary essay in Nature.

Scientists guess that it may have represented female fertility, or been related to shamanistic rituals and beliefs.